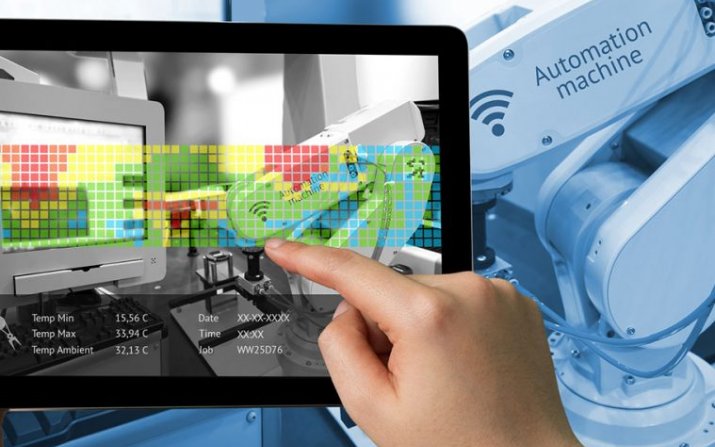 $3.1 million grant from the Cleveland Foundation will support engaging with industry and community

Case Western Reserve University and Cleveland State University have received a $3.1 million, two-year grant from the Cleveland Foundation to further advance the Internet of Things Collaborative (IOTC), an initiative forged between both universities in 2017 to shape the Northeast Ohio region into a digital innovation leader.

The funding, approved by the Cleveland Foundation Board of Trustees, supports completing the establishment of two technology research hubs and expanding faculty engagement.

The Internet of Things refers to the billions of physical devices around the world collecting and sharing data over the internet, including factory automation, healthcare devices that remotely monitor patients and systems that track transportation and utilities infrastructure. The IOTC is working to improve the integration of technology within industry and across our community.

“The continued support by the Cleveland Foundation has been vital for moving the educational, research and community-related activities of the IOTC forward,” said Ben Vinson, Case Western Reserve’s provost and executive vice president. “This new funding will help sustain the momentum of the IOTC and provide critical support that enables Cleveland State and Case Western Reserve to solidify the programmatic foundations for the two hubs.”

“Universities are key to building a knowledge economy for the future, and a partnership between two of the region’s most respected institutions of higher education is catalytic for Cleveland’s transformation,” said CSU President Harlan Sands. “The foresight of the Cleveland Foundation in seeding and providing continued support for the Internet of Things Collaborative paves the way for Cleveland as a destination partner for industry to fuel economic growth and overall improvement in quality of life.”

With the new Cleveland Foundation grant, the IOTC will focus on further establishing two interconnected hubs of activity—Community+Technology and Industry+Technology.

The main goal of the Community+Technology hub is to drive approaches to technology development and deployment that prioritize public interest while keeping humanity at the center of technological advancement. The IOTC is developing community-facing solutions such as those designed to create safe, welcoming “smart” public spaces that bridge the digital divide in urban neighborhoods and catalogues Smart City projects in Greater Cleveland on its website.

The Industry+Technology hub focuses on future manufacturing and connected health, both initiatives aligned with the Cleveland Innovation Project, a collaborative initiative of business and civic leaders designed to bolster Greater Cleveland’s innovation economy. This hub brings together both universities’ schools of engineering and nursing, and the Case Western Reserve School of Medicine, leveraging the institutional healthcare and manufacturing assets in Cleveland. A recent example is a joint project with local manufacturer Rafter Equipment to improve health monitoring and predictive diagnostics of the equipment they design and build.

The Cleveland Foundation has now invested more than $7 million, starting with a planning grant in 2017, to support the creation of the IOTC and leverage the expertise and resources at both universities to advance the region. The foundation’s support has also led to $13 million in federal research funding for faculty associated with the collaborative, with another $40 million in federal research proposals in review.

“This type of collaboration is critical for the economic health of our community,” said Ronn Richard, Cleveland Foundation president & CEO. “This is a unique opportunity for two outstanding academic institutions to come together to turn the vision of Cleveland becoming a technology-based innovation hub into a reality – one that is grounded in equitable and inclusive job creation as we reimagine the workforce of the future.”

Since the collaborative was established, the team at CWRU/CSU has: