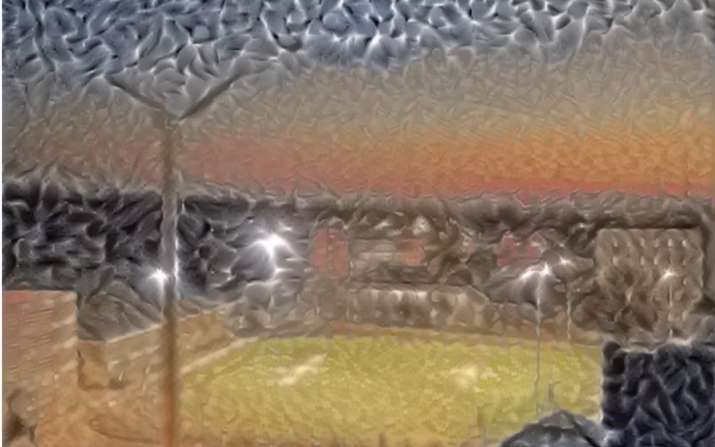 When the renovated White Building opens in 2021, there will be materials-themed artwork on display created by department faculty, staff and graduate students.

The Graduate Materials Society discussed holding an artistic social event during the Fall 2020 semester.  When the idea was brought to department chair Frank Ernst, he suggested that students create art related to their research or using materials they work with.  GMS then decided to make the event a contest to increase participation and collaboration, opening it to faculty and staff as well.

PhD candidate Nishan Senanayake was the grand prize winner.  Senanayake’s piece, “Fatigue at Case,” was created using neural style transfer, an optimization technique that takes three images, a content image, a style reference image, and an input image to style, blending them together so the input image looks the content image has been “painted” in the style of the style image.  Senanayake used a picture of the CWRU landscape  as the content image and a scanning electron microscopy image of fatigue lines as the style image.  Senanayake used resources from CWRU’s High-Performance Computing Cluster to create his artwork.  His work also relates to his research on developing a physical understanding of processing-structure-property using the Data science approaches in the Mesoscience Lab.

Third place went to postdoc scholar Andy Paul Chen.  Chen, who has been painting since he was ten years old, created his piece “Mr. Magpie and the Corundum Conundrum” using acrylic painting on canvas.  Chen was inspired to create a painting based on the corundum conundrum, an unsolved problem involving crystalline aluminum oxide behavior in the presence of trace atomic impurities.  He used a string of beads with sapphire gemstone to demonstrate an asterism, an optical feature caused by inclusions of rutile (titanium dioxide) in corundum.  The magpie, a lover of shiny objects, has stolen Chen’s house key, office key and lunch money.  The alternative title, Kan-yü, or Corundum, is at the bottom of the painting, using the writing system from Iron-Age China (circa 10th-3rd centuries BC), following Chen’s habit of including his titles on his paintings.

A kickoff social zoom event was held on Oct. 6.  Contestants were given until Nov. 13 to submit their up to two pieces of work and had the option to work individually or as a group.  The weekend after the submission deadline, winners were chosen by CSE Dean Venkataraman Balakrishnan, Mechanical & Aerospace Engineering Professor Clare Rimnac, Macromolecular Science & Engineering Professor David Schiraldi and a graduate student from the art department, Annapoorna.  Ernst served as a tiebreaker vote.  Winners received Amazon gift cards.

Studies and engineers microstructures, interfaces and surfaces of metallic materials by novel methods of processing and microcharacterization