Congratulations to the Class of 2020! 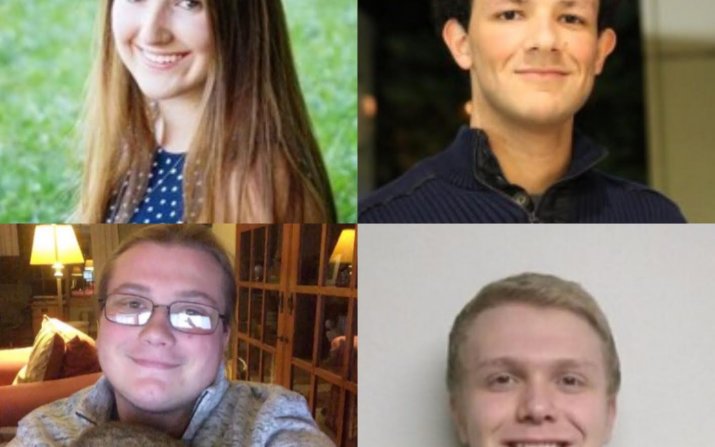 The Department of Materials Science and Engineering annually recognizes outstanding students in the department for their accomplishments with a set of awards. The Wesley P. Sykes Prize is awarded to a senior student who shows outstanding ability in scientific research, especially as evidenced by the quality of his or her senior project. The Professor John F. Wallace Prize is awarded to a senior who embodies the dedication and spirit of Professor Wallace. This year, two students were recognized for each prize.

Miranda Gottlieb, a Bethesda, Md. native, was awarded a Sykes Prize for her “exceptional perseverance this year while conducting her senior project on to investigate unusual mobility trends in alpha-prime sodium-doped vanadium pentoxide and characterization of beta-phase sodium-doped vanadium pentoxide,” according to Professor Jennifer Carter.  Gottlieb worked on her senior project with Professor Alp Sehirlioglu and “successfully pivoted her project to incorporate physics-based computational predictions of phases and band gaps when the experimental aspect of her project ran into unexpected complications,” said Carter, who added that the tradition showed her strong will for success.  Gottlieb, who was involved in the undergraduate student society during her time at CWRU, has accepted a position as a researcher at Lawrence Livermore National Lab in Berkeley, California after graduation.

Kyle Johnson, a Chicago native, was awarded a Sykes Prize in recognition of the leadership role he took on during a team project focused on recommending solutions to a local company with implementing additive manufacturing to their supplies.  “Kyle provided outstanding, professional communication during the project and maintained the group’s momentum when the scope of the project changed dramatically,” said Carter.  She added his contributions resulted in the team learning about the importance of engineering approximations for conducting scientific research to quantifying complex problems with unknown information.  “The work Kyle did is the epitome of the application of science to engineered materials,” said Carter.  Johnson plans to start his career in polymer manufacturing after graduation with the goal of making an impact in the green energy sector.

Dr. Wesley P. Sykes graduated in Metallurgy from Case Institute of Technology in 1916 and then went on to have a career at the General Electric Company.  At General Electric Company, he developed tungsten alloy for the early incandescent lamps and fabrication methods for making tungsten carbide cutting tools.  The Sykes Prize was founded after his death in 1962.

Ethan Field, a Lewisburg, Pa. native, was awarded a Wallace prize for accomplishments at Case and abroad.  Field used his time studying abroad to grow as a researcher, conducting research on hydrophobic silicones when he studied in Zurich in 2019.  During his undergraduate career, he was a TA for ENGR 145 and worked with Professor Sehirlioglu to develop HoloLens augmented reality experiences for learning about crystallography.  He will begin his PhD studies at University of California, Davis in fall 2020.

Noah Tietsort, a Cincinnati native, was awarded a Wallace Prize for his senior project, which explored a new method of adding minute quantities of noble gas into metals to form nanometer-sized dispersoids along selected stress-free internal planes. The method builds on a doping technology originally developed for tungsten lamp filaments and takes it to a new level in order to enable the fabrication of advanced materials, such as superalloys, to endow them with a designed, high-temperature-stable grain architecture so that they can perform with greater creep strength and at higher temperature than current-art alloys. Noah contributed to the selection and the fabrication of nickel-based demonstration material through a series of thermal-mechanical processing steps in which he “performed superbly,” according to Professor Gerhard Welsch. "All of Noah’s works represent the spirit and dedication of Professor Wallace." Throughout his undergraduate career he worked and interacted with industrial programs and in co-ops. In a co-operative program with Arconic he worked on forging, extrusion and heat treatment of titanium alloy products and has been learning inventive engineering designs in view of manufacturing constraints on certain materials.  Tietsort will remain in Cleveland after graduation, working as a Quality Metallurgical Engineer with Howmet Aerospace Cleveland Operations.

The Wallace Prizes are awarded in memory of John F. Wallace, who established and directed the Case Foundry, additionally served as chair of the Department of Materials Science and Engineering from 1979 to 1983, as a teaching faculty member from 1954 to 1990 and continued as a research faculty member until 2006. The Wallace Prize was created after his death in 2008 by his former student alumni, many of whom are in leading industrial positions, to honor students who best embody his spirit and dedication toward metallurgical engineering and metal casting.  While at Case, Wallace’s main interests were in foundry metallurgy, solidification, grain growth and other methods of alloy processing. His students went on to make an impact in metallurgy all over the world, e.g., including by one former student, Dr. Gopal Das, recently deceased, who was instrumental in not only establishing India’s first commercial semiconductor silicon crystal growth facility but he later in the US he facilitated the development and successful use of lightweight titanium-aluminide-alloy turbine blades into the hot sections of P&W’s most advanced aircraft engines.