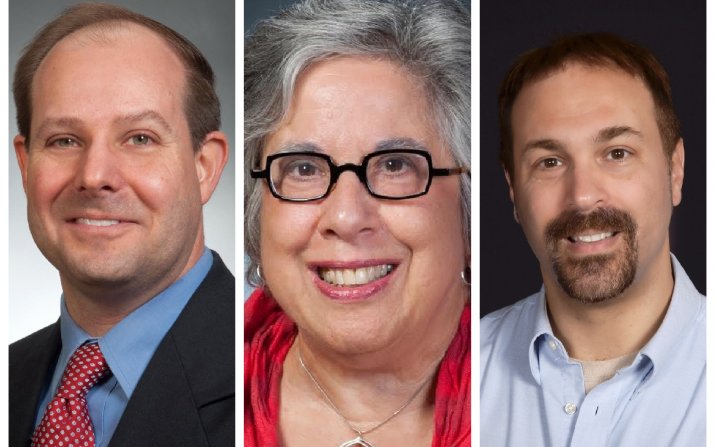 Halbig earned his Master of Science in Materials Science and Engineering from Case in 2000 after earning his Bachelor of Science in Physics from Illinois State University and a Bachelor of Science in Ceramic Engineering from University of Illinois.  He has particularly fond memories of interactions with his advisor, James McGuffin-Cawley, while at Case.  “I enjoyed talking with him about plans and progress for my model development on the oxidation kinetics for the reaction and diffusion controlled regimes,” he said.  “We would discuss the experimental results from my oxidation studies of continuous carbon fibers in a cracked ceramic matrix composite.”

Since 2010, Halbig has been a Senior Materials Research Engineer and Tech Lead for Additive Manufacturing / Joining & Integration of Composite Materials at the NASA Glenn Research Center in Cleveland.  At NASA, he works on developing and demonstrating silicon carbide fiber / silicon carbide matrix (SiC/SiC) composite materials and components for aeronautics applications such as combuster liners, turbine blades, and shrouds for jet engine, as well as developing methods for joining ceramics to ceramics and ceramics to metals to allow for the build-up of complex shaped ceramic components and the integration of ceramics into metal based systems.  He began his NASA career doing research enhancing the durability of ceramic matric composite (CMC) materials and components under extreme environments to advance the state of the art for space applications in harsh environments.  He went on to develop and verify an advanced physics based oxidation model for the recession of carbon fibers in CMCs. From 1995 to 2010, he was a Materials Engineer from 1995 to 2010 with the U.S. Army Research Laboratory in Cleveland.

Additionally, Halbig has authored and co-authored more than sixty journal articles and proceedings papers and two book chapters, and also serves as Associate Editor for International Journal of Applied Ceramic Technology.  He is a trustee of the Engineering Ceramics Division and was chair in the past.  In May 2021, he will serve as chair of the 14th Pacific Rim Conference on Ceramic and Glass Technology in Vancouver, Canada, and he was Program Chair of the 38th International Conference on Advanced Ceramics and Composites in Daytona Beach, Florida.  He is chair of the ECD Jubilee Global Diversity Award Committee and has previously served on the ACerS Nominating Committee, Samuel Geijsbeek PACRIM International Award Committee, Richard M. Fulrath Award Committee, and the W. David Kingery Award Committee.

Hurwitz earned her Master of Science and PhD, both in Macromolecular Science and Engineering, from Case in 1976 and 1979 respectively.  She previously earned her Bachelor of Science in Chemistry from Harpur College, State University of New York at Binghamton.

Hurwitz’s main research interests include the development of aerogels and aerogel composites for use at high temperatures and in extreme environments, including in seals, gaskets, thermal and fire protection systems and thermoelectric power systems.  Currently, she works as a Senior Materials Research Engineer at NASA Glenn Research Center in Cleveland, primarily working on polymer-derived ceramics, ceramic matrix composites and interfaces and the development of high temperature thermal protection systems, including ultralightweight high temperature aerogels and their composites.  During her time at NASA, Hurwitz served as a consultant to the Columbia Accident Investigation Board and led microstructural characterization of flown Space Shuttle Wing Leading Edge materials, contributing to Return to Flight of the Shuttle Orbiter.

Hurwitz served on the Advisory Committee of the High Performance Polymers and Ceramics Center (HIPPAC) at Clark-Atlanta University in Georgia with a NASA HBCU program from 1992 to 2000.  She has also served as a mentor to entry level engineers, NASA Pathways interns and undergraduate and graduate students throughout her career.  She has been a member of technical advisory committees for various DARPA/AF programs focusing on the development of ceramic matrix composites as well.

In 2014, Hurwitz was awarded the 2014 Society of Women Engineers Achievement Award and in 2015, she was awarded the NASA Exceptional Technology Achievement Medal  “for exceptional development of broadly applicable aerogel technology for advanced insulation capable of 1200˚C use temperature.” and the NASA Medal for Exceptional Achievement (2000) for “Exceptional scientific and leadership contributions that have had major impacts on several NASA and Department of Defense National Ceramics Programs.”

Hurwitz is a member of the Engineering Ceramics and Basic Science Divisions of ACerS, has served as an organizer of Thermal Protection Materials Symposia, and has chaired numerous sessions at ACerS conferences dating from 1988.

Most recently, his recent transformative work on empirical modeling of perovskites has provided the most accurate predictive tools for both the structure and unit volume of perovskite ceramics and allows for the first time the quantitative measurement of the effects of both chemical ordering, extrinsic vacancies, and second-order Jahn-Teller distortions.  His studies have recently been used to predict the short-range ordering of Na and La in Na½La½TiO3 which is undetectable via x-ray diffraction.  The methodology is a synergistic integration of advanced computational methods with data-enabled scientific discovery and innovative experimental techniques which is truly unique in the world.

Ubic also studies nuclear graphite under irradiation and the structural changes that occur during, which lead to plastic deformation which can adversely affect the performance of nuclear graphites and hence limit the lifetime of reactors. A clear consensus on the various mechanisms responsible for this microstructural evolution has not yet emerged, though Ubic published the first micrographs of the defects associated with the theoretical “buckle, ruck and tuck” model of graphite basal-plane distortion under neutron irradiation by simulating neutron irradiation with a TEM electron beam earlier this year.

Peter Lagerlof’s crystallography course is the course from Ubic’s time at Case “which has most stayed with me" - in fact, he is currently writing a book on crystallography.

After leaving Case, Ubic went on to earn his PhD in engineering materials from Sheffield University in the United Kingdom, where he also studied his junior year of his undergraduate studies.  After graduating in 1998, he spent two years in a postdoctoral position there before becoming a faculty member at Queen Mary, University of London.  He was recruited by Boise State University in 2007, where he is a professor in the Micron School of Materials Science & Engineering.  In 2012, he became director of the Boise State Center for Materials Characterization and in 2014, he became both director of the REU Site in Materials for Society and editor-in-chief of Materials Research Bulletin.  In 2017, he received Boise State’s highest honor for research, the Foundation Scholar Award.

Ubic has developed an international reputation in the microwave dielectrics field.  He has given 35 presentations in twelve countries on four continents and wrote software that became the UK standard method for calculating the permittivities of microwave resonators used in cellular communication devices and satellites.  Additionally, he has authored 94 articles and three editorials, and co-edited a two-volume work on microwave Materials.

In 1993, Ubic joined the American Ceramic Society, going on to receive the Society’s 2003 Edward C. Henry Best Paper Award and the 2004 Robert L. Coble Award for Young Scholars for his "contributions relating crystallography to the behavior of dielectric properties in complex compounds."  He was an officer in the Society’s electronics division from 2014 to 2019, program chair of the EMA meeting in 2017 and 2018 and chair of the Spriggs Phase Equilibria Award Subcommittee from 2018 to 2019.  He has been a symposium co-organizer at MS&T since 2010 and at PacRim since 2011.  He is an international advisory board member of International Conference on Microwave Materials & their Applications, which he hosted in 2014, bringing it to the Americas for the first time.  He is also on the Society’s publications committee.

Every year, the American Ceramic Society accepts nominations for fellows.  Nominees must be 35 years old and have been a member of the Society for at least five years.  Each nominee is nominated by one lead nominator and requires signatures from seven other Society members, three recommendation letters and a list of the nominee’s patents and publications, professional and corporate achievements, and Society participation/contributions. Candidates will be considered up to five years.  There are up to 75 nominations every year.  A panel of twelve previous fellows reviews the nominations for several rounds.