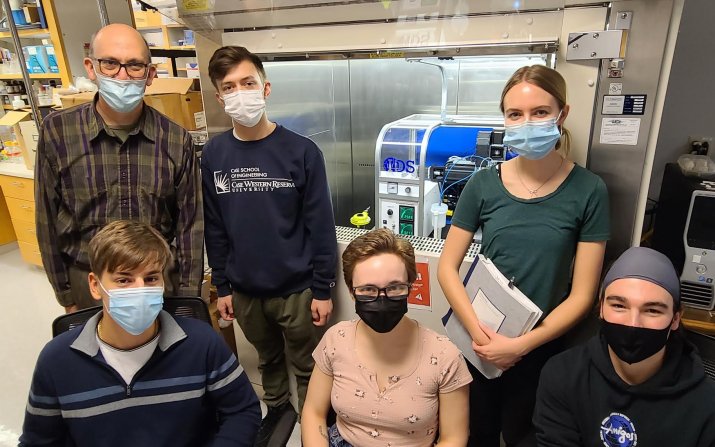 Paco Sheeran’s love of legos contributed to him choosing Materials Science and Engineering as his major when he entered Case Western Reserve University in Fall 2018. “It is like a complex microscopic version of legos where unit cell and crystal structures all come together to create large bodies of materials,” said Sheeran. “Nothing is more fun than legos. I love building things and understanding how the world works” After taking ENGR 145: Chemistry of Materials in spring 2019, Sheeran was sold on the field of study. He credits the course instructor, Associate Professor Alp Sehirlioglu, for confirming his major choice.

Now, as Sheeran prepares to graduate from CWRU with his B.S., he considers materials science and engineering the foundation of engineering. “Without it, nothing else forms.” He recently capped off his CWRU career with his senior project, “Documenting of Aerosol Printed Circuits: Layer Analysis.” Printing microcircuit strain gauges using an aerosol printer using Fusion 360, he discovered that the printer’s nanoparticle silver ink is not viable for circuits, as the particles’ significant agglomerations prevent effective sintering and in turn conductivity of the circuit.

After graduation, Sheeran will work at Emrgy Inc., a water turbine startup company in Atlanta with plans to go on to graduate school in the future. His ultimate goal in engineering is to “sit right at the edge of complex technology and bring that technology to the real world through business,” specifically in renewables. “I want to make the world a better place through sustainable energy and build products that the world needs,” he said. “Understanding product development and customer markets where a product goes is important to me. That's why I am going to work for a startup: to try and see both the technology development side and the business model side where the product is used.”

Looking back at his undergraduate career, Sheeran credits Associate Professor Mark De Guire for “helping me find the right career path” and Senior Research Associate Janet Gbur, his senior project advisor, for teaching him various research approaches. “I had a great time in the department and am so glad that Alp taught ENGR 145 my freshman year,” said Sheeran.