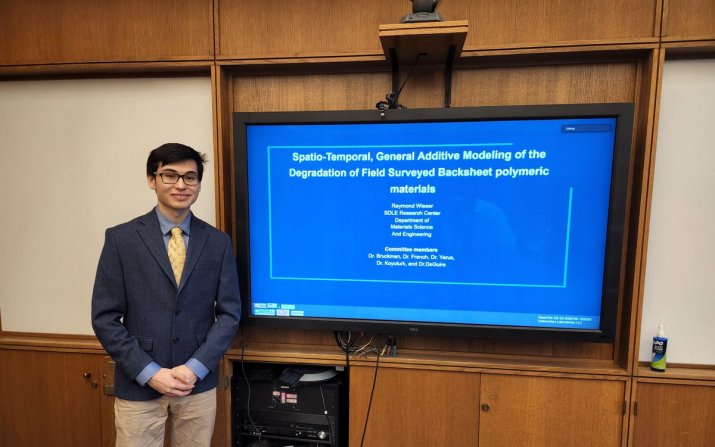 Originally from Naperville, Ill., Wieser decided on his thesis focus after observing degradation predictors and finding spatial dependence while working on another project. He then decided to study field-surveyed degradation. "Over the course of the research, it became clear that the phenomenon being observed would be best understood as a spatial problem, and we shifted our focus in the application of a variety of spatial modeling techniques and applications," he said.

Working with research scientists and industry professionals, Wieser designed and implemented a field survey procedure to capture a variety of effects to help understand material degradation. After developing a reproducible survey strategy to apply across a wide variety of site architectures to model fielded materials behavior, Wieser traveled to photovoltaic sites around the United States to conduct research. Using the measurement protocol, he was able to obtain thousands of individual measurements of degradation related phenomena and process them through reproducible ingestion scripts written in the R computer language.

A researcher in Case Western Reserve University’s Solar Durability and Lifetime Extension Research Center, Wieser was first drawn to the field of materials science and engineering through summer research opportunities during his undergraduate years at St. Olaf college. Primarily interested in applying modeling techniques to isomorphic problems, he appreciates the diverse selection of problems that data science allows him to look at. Additionally, he has begun to apply geostatistical models to degradation of materials. “It is often the case that two seemingly different problems can be modeled using the same techniques,” he said. “These same geostatistical models can also be applied to a variety of problems involving a function of two variables.”

Wieser credits the SDLE Research Center with giving him “many opportunities to present and disseminate new scientific frameworks that integrate computational modeling to solve a variety of real-world problems.” He has enjoyed working with scientific groups all over the world to review the sustainability of photovoltaic power sources, with a goal of informing and influencing international policy. “The ability to contribute to such a significant piece of technical knowledge is a great privilege, especially when these reviews are used to promote the adoption of greener technologies,” he added.

As Wieser begins his Ph.D. studies, he hopes to apply computational modeling methods to seemingly disparate problems, as well as to apply modeling techniques from different scientific fields. After he graduates from CWRU with his Ph.D., he hopes to use his data science skills to help solve society's sustainability problems.

When Wieser is not in the research arena, he enjoys skiing, rollerblading, cooking, juggling, and playing paintball.

Photovoltaic Power is a promising solution to the worlds growing demand for electricity.

However, the feasibility of this technology depends on the total lifetime of the modules.

As the technology continues to become widely adopted, there is pressing need to characterize the lifetime of all of the modules components.

The polymeric backsheet of a PV module provides electrical insulation to the completed device.

When this component fails, it necessitates the module be removed and is a leading cause of premature failures.

Accelerated exposures have historically been used to certify the stability of these materials, but it has been shown that these testing protocols cant accurately mimic the types of exposure seen in the field.

Additionally, due to site design, their exists inherent non-uniformity in material exposure.

To this end, a study protocol has been developed to survey a statistically significant number of modules to generate stress \ response models of backsheet degradation.

Non-destructive characterization methods like colorimetery, surface roughness, and FTIR are used to measure the extent of material degradation.

Each module is measured in multiple locations to better understand the spatial variance of the degradation predictors.

Using this protocol and advanced modeling techniques, models of material degradation are trained. Generalized additive modeling allows for the training of individual models for each predictor, which allows for a in-depth understanding of how each stressor effects the overall health of the material.

Through the analysis of real world data and models of material degradation, site installations can be tailored to maximize service lifetimes.