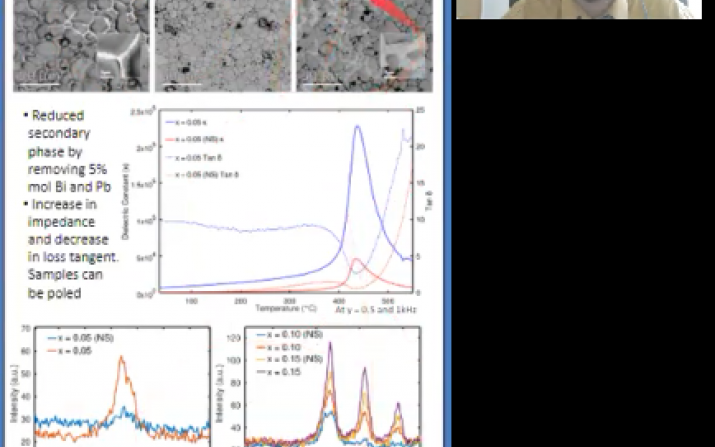 The Department of Materials Science and Engineering was well-represented at the Institute of Electrical and Electronics Engineers’ (IEEE) International Frequency Control Symposium and International Symposium on Applications of Ferroelectrics (IFCS/ISAF) in July.  Professor Alp Sehirlioglu was an invited speaker and PhD student Benjamin Hirt won the conference’s award for Best Student Paper.

Sehirlioglu gave a talk entitled “Guiding the Search for High-Temperature Ferroelectric Perovskites: From Intuition Driven Approaches to Applied Data Sciences.” “High temperature ferroelectrics are sought after for actuator applications such as deep well oil drilling, fuel modulation in jet engines or ultrasonic drilling on the surface of Venus. The use of converse piezoelectric effect in actuators require large piezoelectric coefficients to obtain the necessary displacement under a reasonable electric field or within a suitable volume. As a result, of interest are perovskite ferroelectrics near a Morphotropic Phase Boundary at which the electromechanical properties maximize. However, the operating temperature of such materials have been limited.” He discussed the advantages and disadvantages to “different approaches to discovery of new high temperature ferroelectrics, varying from trial and error to intuition or theory driven to approaches enabled by information sciences.”

IEEE holds the IFCS/ISAF annually, alternating between holding it in Europe, Asia or North America each every third year.  In 2023, Cleveland will be the host city with Sehirlioglu as the general chair.

Sehirlioglu has been involved with IEEE since he was a PhD student at University of Illinois.  He is a senior member, a member of the Ferroelectrics Standing Committee (Ferrocom) and the chair of the Diversity and Inclusion Committee. In the past, he has held an elected adcom position and the Ferrocom publications chair position.

Hirt won the event’s Best Student Paper Award for his paper “High Temperature Ferroelectrics Using Ternary Components With Cobalt: Stoichiometry Control.”  He wrote about how “high temperature piezoelectrics could be used for more efficient fuel injection in diesel engines by replacing solenoid valves and for sensors in structural health monitoring in nuclear reactors.”  Hirt received a $200 honorarium as his award.

Hirt’s main research interests include high temperature piezoelectrics with high piezoelectric coefficients and creating nanocomposites for smart propellant.  After he graduates in 2023, he hopes to become a researcher in a national lab or industry.