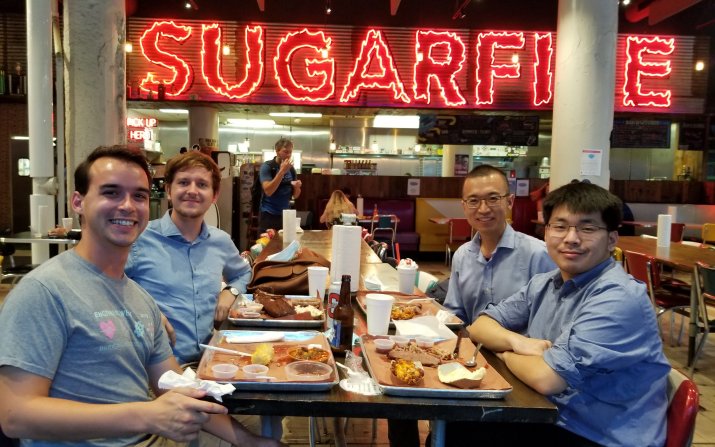 Ren’s presentation, “A New Perspective on Alloy Surface Engineering By Infusing High Concentration of Interstitial Atoms,” focused on potential electronic interactions between interstitial solutes and the surrounding substitutional metal solvents. “When talking about (the interactions), people often heard or gave blurry answers,” said Ren. He represented the research group of Professor Frank Ernst, who recently discovered the significance of local interatomic carbon—metal bonding for the outstanding properties of concentrated interstitial solid solutions. Ren designed an independent “case”, based on the 316L stainless steel system, infused with an uniform distribution of concentrated interstitial carbon to understand the intrinsic properties. The new material with uncommon performance led to collaborations with groups at Ohio State University and Lawrence Livermore National Laboratory. “So far, all of the evidence from both previously published work and our collaborative research indicates that the ‘weak localized bond’, instead of only a model, is truly existing in the alloy system infused with concentrated interstitial solutes,” said Ren. “This is a long journey of exploration but the results are worth the effort.”

Ren’s presentation was well-received. His session’s chair, Boeing's Paul Wilson, approached him to say that he liked the talk, and an assistant professor from Marquette University, Le Zhou, also approached Ren to say he was interested in collaborating with the group to apply their alloy surface treatments on the additively manufactured components to further enhance performance. One of Ren’s main motivations in attending the conference was meeting potential collaborators and he hopes this conversation will lead to more research.

After more than a year of conferences going virtual due to the COVID-19 pandemic, Scannapieco was happy to travel to St. Louis, Mo. for this in-person meeting. “In-person conferences are so much better,” he said. “During the virtual conferences I attended, there was almost no audience interaction and no cool things to do at or outside of the conference. In addition to easily being able to discuss with presenters, I was able to ride up the Gateway Arch in St. Louis and get some delicious southern barbecue. These unique experiences only come with traveling to a conference; they don’t exist in virtual conferences.”

As a board of trustees member, Scannapieco oversaw the conference’s Domesday competition, where students  build and test a dome modeled after ASM’s headquarters dome. Students present their reasoning and construction process to judges and are graded on the construction of the dome, materials used, how many materials they can incorporate, and the compression strength of the dome. MTS machines on the showfloor were used to compression test each dome to failure.

Scannapieco said that the conference included many “amazing” talks, but he particularly enjoyed the keynote address from Tesla’s Paul Edwards. The address focused on paradigm shift in the materials selection process for construction of vehicle structures. Edwards argued that less mechanically competitive materials can be utilized in favor of preferred processing methods. He recommended switching from high strength steels to cast aluminum alloys because the latter performed better than the welded joints, the weakest point in the structure. A major component of the car can be produced in one piece rather than 80 by utilizing the largest casting machine in the world. “I feel this mirrors my own research where we are attempting to simplify the construction of alloys and AM components, albeit not on the scale of a car,” said Scannapieco.

Ren also enjoyed Edwards’ presentation and was particularly impressed that it only took Tesla 18 months to bring this idea to fruition.

At the conference, Ren and Scannapieco met up with two CWRU alumni pursuing PhDs in materials science and engineering: Adam Krajewski, who is now studying at Pennsylvania State University, and Daniel Hong, an Ohio State University student. “They were super excited to learn that the entrance and third floor of White is now renovated,” said Ren.