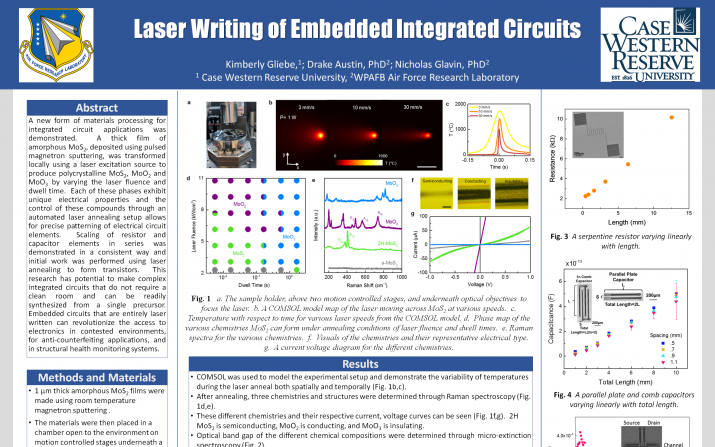 Gliebe began conducting research for her first place winning poster, “Laser Writing of Embedded Integrated Circuit,” three years ago.  She worked with Drake Austin and Nicholas Galvin of the Air Force Research Laboratory at Wright Patterson Air Force Base, and their research paper was recently accepted by Materials Today for publication.  Spending three years working on this project taught Gliebe “how to run a research project from start to finish.”

Gliebe, Austin and Galvin demonstrated a new form of materials processing for integrated circuit applications.  The group used a laser excitation source to locally transform a thick film of amorphous MoS2 that had been deposited using pulsed magnetron sputtering, to produce polycrystalline MoS2, MoO2 and MoO3 by varying the laser fluence and dwell time.  Each phase exhibited different electrical properties.  Using an automatic laser annealing setup to control the compounds allows for precise electrical circuit element patterns.  The researchers demonstrated a consistent scaling of resistor and capacitor elements as well as an initial version of a transistor.  “This research has potential to make complex integrated circuits that do not require a clean room and can be readily synthesized from a single precursor,” said Gliebe.  “Embedded circuits that are entirely laser written can revolutionize the access to electronics in contested environments, for anti-counterfeiting applications, and in structural health monitoring systems.”

"One notable thing about this work is that while in-situ alloying using additive manufacturing is not a new process, this is the first time a material has been in-situ alloyed where a vast majority of the alloy (95% by weight) is a non-reacting phase,” said Scannapieco.  “One good way to think of this is like a swimmer and an inner tube. Most in-situ alloying has a pool full of inner tubes, no water, and the swimmer just needs to grab an inner tube. Our system is more like a big pool full of water, and only one swimmer and one inner tube. It takes some time and energy to connect the swimmer and inner tube together, which is where the difficult part of the work comes into play: how can we provide enough time for the chromium and niobium to react in a sea of non-reacting copper?”

Primarily a metallurgist, Scannapieco usually focuses on the metals coming out of the systems rather than the system capabilities when working with laser additive manufacturing systems.  A discovery of his research that he found particularly interesting was how to analyze and measure his alloying success.  The alloying was 95 wt% copper and non-reacting, so the group dissolved the metal in nitric acid.  “The nitric acid loves copper, and easily removes it from the system, but doesn't even touch the chromium or niobium. This leaves behind exactly what we want to look at!” said Scannapieco.

Powers Beggs tied for second place for her poster, Topographic Image Analysis of Surface Morphology as a Function of Cooling Rate in (Nd,Li)TiO3 Thin Films, that she also presented at Electronic Materials and Applications conference in January.  She characterized images of thin films created by PhD candidate Elahe Farghadany using techniques such as segmentation and morphological operations.

Junior Hugh Smith also reprised his poster from January’s EMA conference, “tr-KPFM Measurements on the Surface of LaAlO3/SrTiO3 Heterostructures.”  He used data science techniques to determine the number of adsorbed surface changed species on the heterostructure, using both supervised and unsupervised machine learning to determine the physical properties.  His father, a mechanical engineer, frequently took him to ASME events when he was growing up, and he was happy to attend his first ASM Cleveland event.

Due to COVID-19 conditions, the conference was held via zoom.  Each student presenter got their own breakout room for attendees to enter and exit at their own pace.  “This session was structured so that I could give an overview of my work with some depth to it and answer questions much more efficiently,” said Powers Beggs.

While Gliebe thought the virtual format “went well,” she was disappointed that there was not an opportunity for student presenters to see other presentations.  Scannapieco also missed the opportunity for in person interactions, but added, “I am thankful to have had a few opportunities to present this past year, despite the unfortunate state of the world.”

In addition to the student poster presentations, the event included a featured speaker, renowned metallurgist George Vander Voort.  “(Vander Voort) showed some amazing quality micrographs comparing different metallurgical preparation procedures,” said Scannapieco.  “I hadn't realized before his talk, but there are certain etchants that dye the microstructure different colors based on grain orientation. This made for just beautiful images, it was great to see!”  Smith also appreciated learning about biomaterials, a field he has yet to take classes in, from the speech.

"I am incredibly proud of the student winners," said Smith.  “Kim is an important mentor for me in shaping my research and academic career. Bridget has always been a close friend who is extremely hardworking and accomplished, so she certainly deserved recognition. David is someone I look up to, and it is nice to see him be part of the all-CWRU awardees. I am happy to work with all of them.”