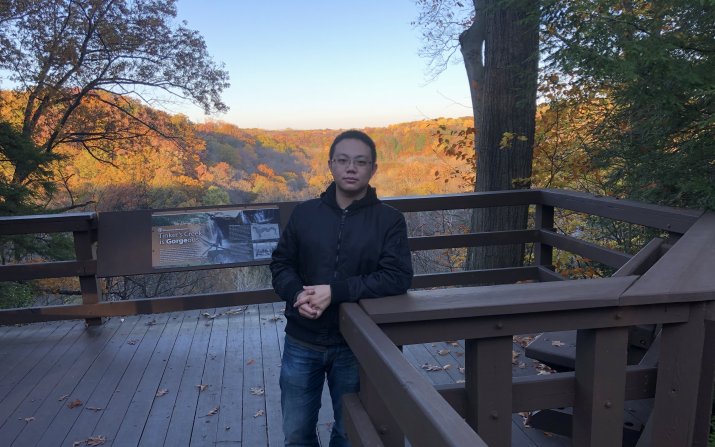 On June 22, Chenxin Deng successfully defended his M.S. thesis, "Operating Stresses and their Effects on Degradation of LSM-Based SOFC Cathodes."

Deng, who grew up in Dalian, China, was exposed to the field of materials science and engineering from an early age. Both his parents studied heat treatment as college students, and he enjoyed reading their textbooks. “I was amazed that metals can change their mechanical properties by different heating and cooling processes.” He is primarily interested in energy storage materials, but developed an interest in magnesium alloys during his undergraduate studies at Chongqing University in Chongqing, China.

When Deng came to Case Western Reserve University in 2017, he already had three years of experience of conducting research using electrochemical methods. He strengthened his knowledge while working with his advisor, Associate Professor Mark De Guire, gaining a clearer understanding of electrochemistry and learning how to improve the test stand and test procedure.

In addition to serving as an academic mentor, De Guire was a source of emotional support for Deng during his M.S. studies, particularly after his father’s death in 2018.

After Deng graduates from CWRU in August, he hopes to either take a postgrad job in the United States or start his PhD studies in Europe. Eventually, he hopes to become a professor at a university or have a career in research and development.

The performance of solid oxides fuel cells (SOFCs) with four different Mn excess of lanthanum strontium manganite (LSM) -based cathodes were examined under different temperatures (1,000 °C, 900 °C), current densities (0, 380, and 760 mA cm⁻ 2 ), and cathode atmospheres () for durations ranging from 58 to 1,008 h. Each yttria-stabilized zirconia (YSZ) electrolyte-supported “button” cell had a porous Ni/YSZ composite anode and a porous LSM/YSZ composite cathode. The cells’ output voltage versus time were recorded and electrochemical impedance spectroscopy (EIS) and linear sweep voltammetry (LSV) measurements were performed every 24 hours. The total area specific resistance (ASR) was calculated from these measurements. The values of ASR from both EIS and LSV were comparable between each other but lower than that from durability test. Distribution of relaxation times (DRT) analysis was performed to investigate the electrochemical processes and their corresponding relaxation frequencies as well as their attributions to the total ASR. The series resistance and parallel resistance that obtained from the equivalent circuit fit of the Nyquist plot were higher at low temperature and low regardless of LSM compositions. The area of the peaks derived from DRT analysis increased with time during individual tests.

The microstructures of the tested cells were examined using scanning electron microscopy and energy-dispersive x-ray spectroscopy (SEM/EDS). Manganese oxide particles were observed near the cathode-electrolyte interface after prolonged (1,008 h) testing in air of a cell with LSM of 11% manganese excess, and after a short test (58 h) under low oxygen ( = 0.10) in a cell with LSM of 5% manganese excess. However, the role of MnO x in cell degradation is still unknown.