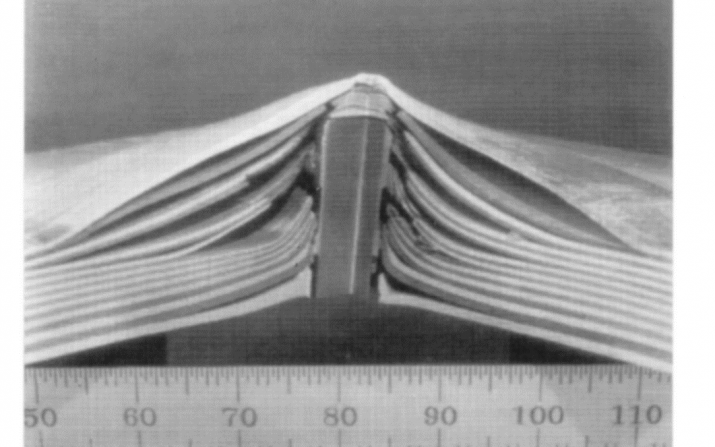 A selection of highly cited papers from 1995-2000 that emerged from his research group and collaborations with Lawrence Livermore National Lab, Stanford, ALCOA, General Dynamics, and Boeing included work on laminated metal-matrix composites that were being considered for lightweight armor and jet engine containment applications due to their exceptional damage tolerance as shown in Figure 3 and explained in the major review, "Mechanical behaviour of laminated metal composites". Work on high temperature intermetallics under consideration for a number of aero-engine applications included: "Loading rate and test temperature effects on fracture of in-situ niobium silicide-niobium composites" and "Refractory metal-intermetallic in-situ composites for aircraft engines". Work on bulk metallic glasses documented their surprising high damage tolerance/toughness, "Fracture toughness and notched toughness of bulk amorphous alloy: Zr-Ti-Ni-Cu-Be". Another major review article, "Effects of hydrostatic pressure on mechanical behaviour and deformation processing of materials” captured the effects of superimposed pressure on mechanical behavior and deformation processing, while  "Effects of superimposed hydrostatic pressure on flow and fracture of a Zr-Ti-Ni-Cu-Be bulk amorphous alloy” was the first to detail these effects on bulk metallic glasses. The fatigue behavior of lightweight magnesium composites manufactured in the Case Metal Processing Lab was highlighted in the "Effects of SiCp size and volume fraction on the high cycle fatigue behavior of AZ91D magnesium alloy composites”.

The collaborative work on laminated metal matrix composites demonstrated high damage tolerance and resistance to penetration as illustrated in Figure 3. The 1988 review article highlighted the Nobel Prize work of Percy W. Bridgman on pressure effects on materials and summarized the more recent work around the world and at CWRU on a variety of structural materials, in addition to bulk metallic glasses, that demonstrated the increased formability possible with such approaches. The early work on refractory metal intermetallic in-situ composites for aircraft engines has provided a basis for more recent work at CWRU and elsewhere in the 2020’s.

We invite you to join us in the AMMRC’s 35th anniversary celebration as we celebrate decades of research, development, and Center milestones. Visit the AMMRC web site, ammrc.case.edu, and keep watch on social medial for insights on the AMMRC through the decades as we share stories about the evolving laboratory and honor the efforts of the diverse academics, staff, and students that have propelled the AMMRC forward.

Social media: Join us on social media for fun and engaging content that will help you discover the AMMRC’s history and where it’s heading in the future. #AMMRC35.