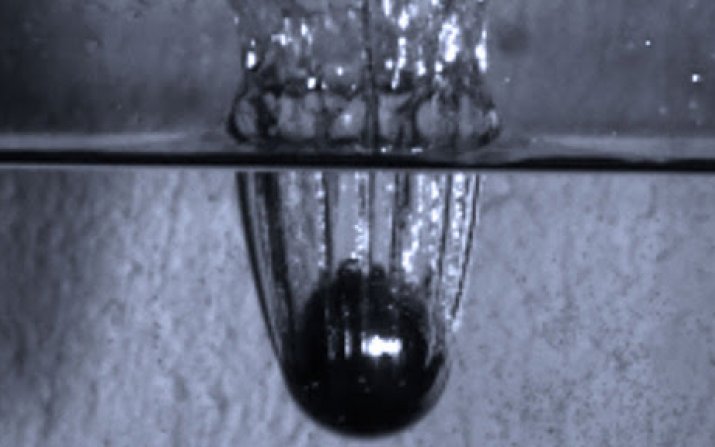 Researchers expect anything from water vaporization to creating ice or light in project funded by U.S. Navy, Air Force

Sometime next summer, on the second floor of a research building on the Case Western Reserve University campus, scientists hope to record something the world has never witnessed: The moment of impact when an 18-millimeter-diameter projectile hits a wall of water at 9,000 miles per hour.

What will occur in that instant and in the subsequent milliseconds—expected to be captured in detail by high-speed cameras—is a tantalizing mix of “knowns, unknowns and what-if’s,” according to the project’s lead researcher.

“Even today in 2022, the scientific community actually doesn’t know what exactly will happen to the water in that type of event,” said Bryan Schmidt, an assistant professor of mechanical and aerospace engineering. “But there’s reason to believe it might do some really strange things—from creating ice to creating light.”

Schmidt said his experiments will be at a speed nearly twice as fast as anything in the published research and with far better recording equipment than when military research was first conducted in the 1940s to study what the shock waves from underwater explosions might do to boats or submarines.

“We’re doing something no one else is doing right now,” he said. “Our experiments are also timely and could have a far greater impact for our country.”

“What we learn will be very important to this country for being able to accurately predict things like the damage potential for ships close to high-yield underwater explosions, the flight of hypersonic vehicles or missiles through mist, rain, or sea spray, and damage potential of hypersonic projectiles,” Schmidt said.

The research by Schmidt and his collaborators is supported by a pair of recent defense grants, totaling about $1 million: $750,000 from the Office of Naval Research and $300,000 from the Air Force Office of Scientific Research Instrumentation Program.

Hypersonic weaponry has also been in the news recently. The U.S. has launched test rockets, while Russia and China claim they’ve already used them in conflicts.

Hypersonic weapons travel at speeds greater than Mach 5, or about 4,000 mph, making them hard to detect and intercept. The missiles can also maneuver and vary altitude, allowing them to evade missile-defense systems.

To conduct the experiments, Schmidt will use a 40-foot-long piece of equipment known as a “two-stage light gas gun” to propel an 18-millimeter projectile into an 8-foot deep tank of water.  The devices, often used by scientists to propel objects to simulate meteorites hitting the atmosphere, have two different stages of propulsion, resulting in faster launch speeds.

And while the impact is dramatic, to the viewer in the room, it will be too fast to see with the naked eye—and will “result in a big splash of water caught by a kiddie pool,” Schmidt said.

The real excitement and payoff will come when he views the video and photographs.

That means Schmidt and his team will do their experiments at speeds that are hypersonic in the air (more than five times the speed of sound), but technically supersonic relative to the speed of sound in water.