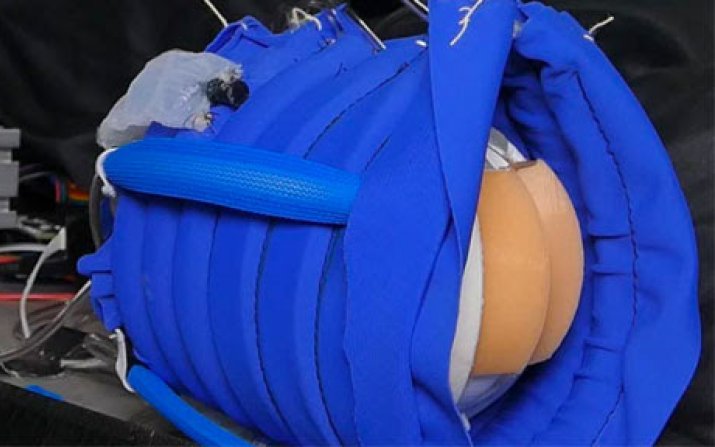 The researchers are mainly focused on further improving what they and other researchers call “soft graspers,” robotic limbs that can pick a peach or mushroom, for example, without damaging it. 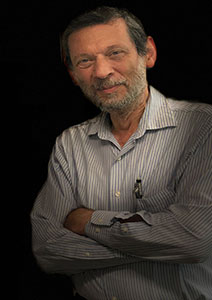 “Many people may have seen robotic arms picking apples and dropping them in baskets, but we’d like to accomplish a level of sensitivity far beyond that,” said biology professor Hillel Chiel, one of the three researchers on the project. “If we could have robots capable of learning to handle soft fruits or vegetables without crushing them, we would really be advancing.”

The team is particularly focused on improving the robotic arm’s sensitivity and ability to “learn,” said Roger Quinn, the Arthur P. Armington Professor of Engineering and director of the Biorobotics Complex at Case School of Engineering, who is also working on the project.

“There are already models for learning that engineers use, but they’re really mostly guesses at what an animal does—inspired by the animal, yes, but only as an approximation,” Quinn said. “But what we can do here is actually observe what is going on in the nervous system of an animal as it is actually learning and then try to replicate that.” 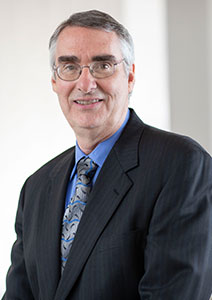 Existing robotic arms don’t have the intelligent sensitivity to discern when to tug gently or pull hard, Chiel said. Even simple animals like the sea slug, however, demonstrate that skill: the sea slug routinely adjusts how hard or gently it uses its own tongue-like grasper to pull off bits seaweed to eat, he said.

And because the slug has only a few hundred neurons controlling that organ (and only 20,000 neurons in its entire brain—compared to 80 billion in a human brain), scientists can more easily track brain-muscle interactions and gain insight into how to build a robotic system, he said.

The National Science Foundation (NSF) awarded the team a $1.5 million grant to support the effort. Former Case Western Reserve researcher Vickie Webster-Wood of Carnegie Mellon University (CMU) applied for the funding, and all three researchers are listed as co-primary investigators on the new project. 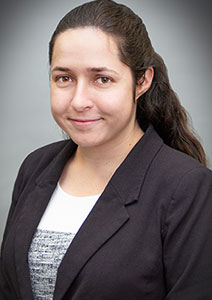 Chiel, who also has appointments in neuroscience at the School of Medicine and biomedical engineering at Case School of Engineering, will continue to work with the sea slugs, cataloging how they learn at the neural level.

Quinn will work on building a synthetic nervous system inspired by those findings, and Webster-Wood will build the actual robotic appendage with artificial muscles to test the various versions the team comes up with (see an earlier version of the grasper in the photograph at top; another version is shown on Chiel’s youtube page).

“When we look at animals, we see that the structure and properties of muscles are actually adaptable and contribute directly to how they are able to perform dexterous and delicate grasping,” said Webster-Wood, an assistant professor of mechanical engineering at CMU whose sea slug robots captured national attention in 2016 while at Case Western Reserve.

“In engineering, this idea is called morphological intelligence, where the physical system helps simplify the controller,” Webster-Wood said. “Our work will harness this phenomenon, originally taking inspiration from the sea slug, to create a new, fully adaptable soft robotic arm and grasper.” 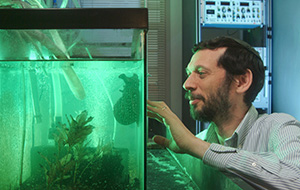 Chiel observing a sea slug in its tank.

Research lines up with ‘NeuroNex’ effort

This new endeavor complements the researchers’ work under the umbrella of the NSF’s far-reaching, $50 million project: Next Generation Networks for Neuroscience, or NeuroNex.

A team led by Quinn—and including Chiel and Webster-Wood—was awarded about $8 million of that NeuroNex funding to examine how the nervous system in animals of various sizes coordinates and controls interactions with the environment.

“They fit together well—NeuroNex is researching ‘How can we use robots as models to understand biology better?’—but this new project is looking at the same issue, but from the other direction,” Chiel said. “Here, we’re looking at the biology of the sea slug as if it were an alien technology—one that, if we can learn it, we can do better with the next generation of robots.”