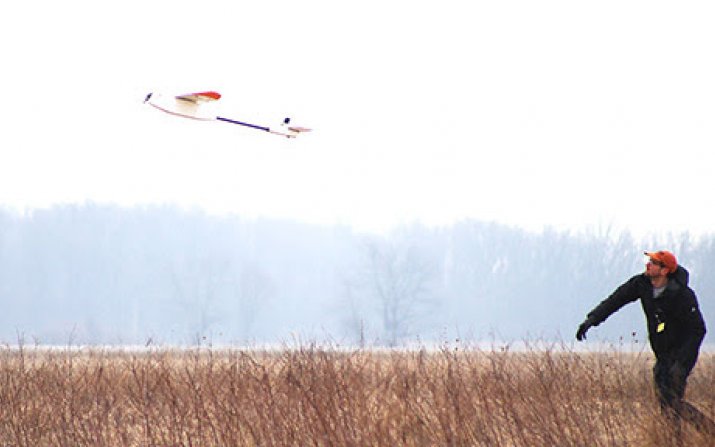 If fully electric regional passenger jets someday fly from Cleveland to Atlanta, aviation historians will likely point out that the first successful in-air test of the battery technology making it possible happened on a frozen Dayton-area airfield in early 2019.

That’s when Case Western Reserve University Professor of Mechanical and Aerospace Engineering Vikas Prakash—along with state government and private partners—launched an otherwise unremarkable, single-propeller fiberglass airplane into the skies at Springfield-Beckley Municipal Airport and waited to see how long it could fly before running out of juice.

In previous tests, the same automated plane stayed airborne for 91 minutes before the batteries died. This time, with a different set of specialized wings, it kept going and going—for 171 minutes total, nearly three hours aloft without recharge.

The difference: Tucked inside the 6-foot-wide wingspan of the 7-foot-long, red and white unmanned aerial vehicle (UAV) were “structural battery” components.

That innovation, being developed by Prakash over the last three years, turns the wings themselves into an extension of the batteries powering the plane. The technology not only extends flight time and distance, but allows more room in the fuselage for critical payload.

For now, that payload would likely be camera equipment for surveillance, not unlike drones already in service. But the vision is that a fully electric regional jet could someday carry materials for delivery and—once scaled up considerably—even passengers.

“That’s the idea, that’s what we’re aiming for in the long run,” said Prakash, who gained media attention in October 2017 when he was awarded a NASA grant to work toward developing more-electric regional aircrafts.

His latest work is related to the NASA project conceptually and is funded by the Partnership for Research in Energy Storage and Integration for Defense and Space Exploration (PRESIDES) program. That partnership is sponsored by the Ohio Federal Research Network (OFRN) and managed by the Great Lakes Energy Institute at Case Western Reserve.

The two-year, $450,000 project, officially known as “Hi-Performance Multifunctional Structural Energy Storage,” is one of 22 OFRN applied-research projects in the state, all of which emphasize collaboration among research universities, government and private companies.

“This new battery has a real chance to improve the day-to-day operations of our federal partners, and it has clear commercial applications,” OFRN Executive Director Dennis Andersh said in a statement. “We are proud to have enabled and supported this type of successful collaborative research.”

The Feb. 22 flight test at Springfield-Beckley Municipal Airport was conducted under a Certificate of Waiver or Authorization granted to the U.S. Air Force Research Laboratory in Dayton by the Federal Aviation Administration.

Prakash and Jeff Taylor, founder and chief executive officer of Event38, an Akron-based drone company that specializes in mapping and surveying applications, led the test.

“The new structural battery system offers benefits that will appeal to our customers,” Taylor, a 2009 Case Western Reserve aerospace engineering graduate, said in the OFRN news release. “Use of this technology will open new doors to build crafts with more complex and sensitive sensors that small drones usually struggle to carry.”