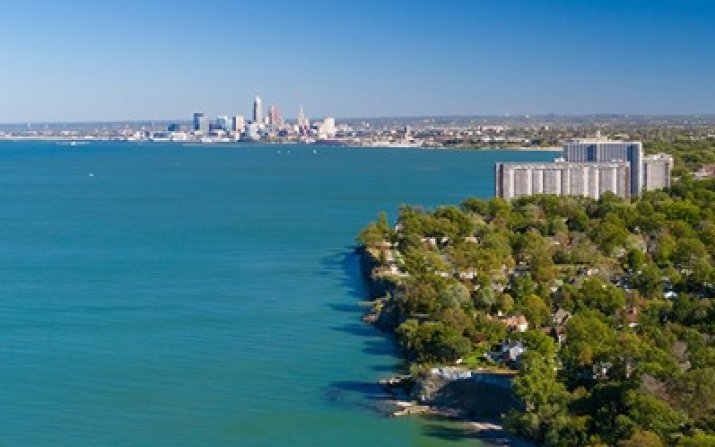 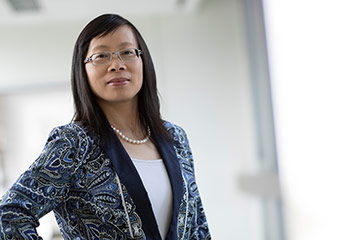 
“And neither of those things are what anybody wants,” said Zhang, an associate professor of civil engineering at the Case School of Engineering at Case Western Reserve University, who specializes in environmental chemistry and engineering.

“The algal bloom in Lake Erie and in other water bodies is persistent, even as it varies from year to year, so there is great interest in finding new ways to keep contaminants from reaching the lake at all,” she said.

Zhang recently landed a pair of grants to address both of those water pollution challenges:

Harmful algal blooms appear annually in Lake Erie—especially in the western basin—which result in an oxygen-depleted dead zone in the central basin near Cleveland, as the algae dies off.

“There are two ways to try to stop contaminants from getting to the lake—before they reach the receiving water, or after,” Zhang said. “Our efforts are focused on making an impact beforehand with the livestock manure, but after-the-fact with the agricultural runoff.”

While Ohio, like other Midwest states, is still home to small family farms, most animals raised for human consumption are grown on factory farms, also known as Concentrated Animal Feeding Operations, or CAFOs.

Raising thousands of pigs or chickens in football-field-sized barns results in vast amounts of both solid and liquid waste, which is frequently placed into tanks called Anaerobic Digesters (AD). Those tanks use bacteria to process the waste into biogas (methane), which is then burned for energy, according to the U.S. Environmental Protection Agency (EPA). In other cases, the waste is held in retention ponds until it is sprayed onto fields as fertilizers, Zhang said.

The problem with either is that much of that waste also carries high concentrations of the antibiotics and growth hormones that, in some cases, the animals had consumed to stay healthy and grow faster in crowded conditions. And there is little research on whether those digesters are efficiently breaking down the antibiotics and other compounds, if at all, Zhang said.

“About 70% of those compounds are released into the waste, not used by the animal,” Zhang said. “And since we don’t know exactly how well the digesters work on the contaminants, it is likely that they end up in the groundwater or on the plants it is meant to fertilize.”

There also are literally hundreds of different compounds which may be dangerous to plants, animals and humans, she said.

Zhang is getting assistance from professor Xinmin Zhan, an expert in digesters from the National University of Ireland to evaluate a representative group of antibiotics and growth hormones. They hope to create a model that government agencies like the USDA could use to determine which contaminants should be removed before the waste goes into a digester or is sprayed onto a field.

“We know that the digester removes some more than others, but which ones? And how might that apply to the other compounds?” Zhang said.

The project to remove contaminants that migrate from farmers’ fields into groundwater or other surface water and then into the lake is more straightforward, Zhang said, but no less problematic.

Despite various efforts to reduce phosphorus over the last decade, the Ohio EPA reported in 2018 “no clear decrease in loading yet.” Loading describes how much material the water is carrying. In February of this year, the EPA announced it would develop an enforceable limit on how much phosphorous can be put into the lake.

The team plans to identify areas where the phosphorus output is the worst and install honeycomb-like structures designed to absorb the nutrients before they migrate to streams and the lake. Workers could then “empty” the collected phosphorous from the structure and re-use the chemical, making the structures semi-permanent and valuable to the user as well.

Zhang is working on this project with phosphorus expert Chad Penn of the USDA’s Agricultural Research Service in Indiana.