5 things to know about… fireworks 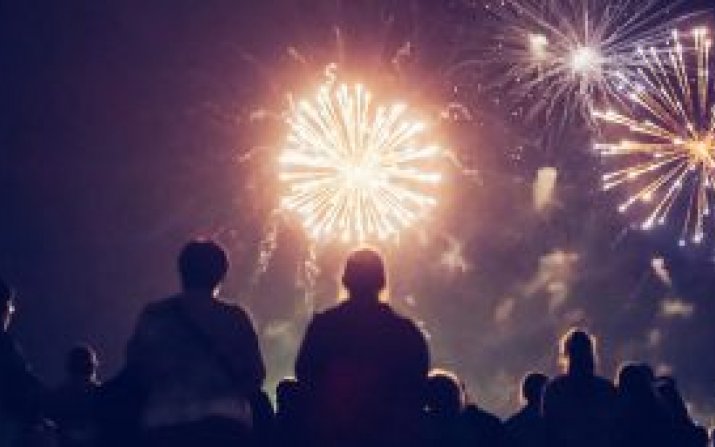 Explosions are at the heart of one of the most beloved Independence Day traditions: pyrotechnics—or, as they’re more commonly known, firework displays. This July 4 weekend, people all around the U.S. will celebrate the holiday by watching these spectacular, colorful displays.

To better understand this tradition, we called upon Brian Maxwell, assistant professor in the Department of Mechanical and Aerospace Engineering and director of the Computational Fluid Dynamics and Supersonic Combustion Research Lab at Case Western Reserve University. Maxwell’s research team, consisting of students ranging from undergraduates to doctoral candidates, studies fuel safety in the oil and gas industries, hydrogen infrastructure, and propulsion systems using supersonic combustion.

As an expert on combustion, we checked in with Maxwell and asked him to share five things to know about fireworks. Read on to learn his insights on the history, prevalence and safety of these displays.

1. Fireworks were invented around 1,000 years ago.

Fireworks were likely invented around 1,000 years ago in China, during the Song Dynasty (some time between 960-1279 AD). During this time, commoners could freely buy fireworks from markets, which often consisted of bamboo packed with gunpowder, an explosive compound invented just a few hundred years before during the Tang Dynasty (618-907 AD). Fireworks eventually made their way to Europe in 1295, thanks to Marco Polo. In England, fireworks were widely used by the royalty to entertain followers for many celebrations. Early settlers brought fireworks to America, and such fireworks were incorporated into the very first Independence Day celebrations. To this day, fireworks are an integral part of Fourth of July celebrations, sporting events, festivals, and other special events.

2. Fireworks get their colors from chemical compounds.

Gunpowder is still the main fuel that drives fireworks, however a number of chemical compounds(metallic salts or oxides) are added to give desired colors and tones. For example, sodium nitrate gives a yellow tone, copper chloride gives blue, red comes from strontium and lithium salts, orange is made from calcium-based compounds and green comes from barium compounds. Purple is derived from a mix of red- and blue-producing compounds. During combustion, these added compounds emit light through radiative heat transfer. The colors we perceive are a result of this radiative heat transfer occurring at specific wavelengths, which depend on the compound used.

3. Fireworks can cause unintended explosions.

Safe storage and handling is very important when using or storing fireworks. Every couple of years, an incident occurs somewhere in the world that causes fatalities and injuries. In the news this year on March 16, an incident in a residential neighbourhood in Ontario, California, resulted from an explosion of a “large amount of fireworks.” This incident resulted in two deaths, one injury and $3.2 million in damage. Possession and use of fireworks are illegal in the city of Ontario without a permit.

The worst disaster involving fireworks occurred in Lima, Peru, at the Mesa Redonda shopping center on Dec. 29, 2001. The result was a fire, which caused 291 deaths and 134 injuries. It is also suspected that fireworks were involved in the Beirut explosion of 2020. On Aug. 4, 2020, a large amount of ammonium nitrate (often used as fertilizer) exploded in the city’s port, causing 207 deaths, 7,500 injuries and $15 billion USD in property damage. It is suspected that the first blast was triggered by a fire involving fireworks, which were stored alongside the ammonium nitrate. This resulted in a blast estimated between 1.5 to 2.5 tons of TNT equivalent. The investigation of the incident is still ongoing.

4. The fireworks industry is BOOMing.

In 2019, China was the largest exporter of fireworks at $843 million, while the U.S. exported the second-most at $103 million, according to the Observatory of Economic Complexity. The top importer of fireworks is—not surprisingly—the United States at $368 million. This means that the U.S. imports (and uses) more than 3 times the amount it exports to other countries. Combined with the domestic market, the U.S. likely spends the most on its fireworks displays. In 2019, global fireworks trade was estimated at $1.37 billion. By estimates from the American Pyrotechnics Association, Americans typically spend about $1 billion on fireworks each year (from both imported and domestic sources). In 2020, this figure doubled to $1.9 billion. Within the U.S., in 2019, the state of Missouri spent the most on imported fireworks ($51 million). Mississippi came in second at $42 million, and Ohio in third at $30 million! Clearly Ohioans love their fireworks displays!

5. The use of fireworks shot up during the pandemic.

Normally, according to the American Pyrotechnics Association, nearly 80% of fireworks revenue is associated with the Fourth of July. In 2020, due to lockdowns and cancelations of events, much of the U.S.—especially northeastern areas—saw daily fireworks displays instead. This included cities such as Boston, New York City, Washington, and—you guessed it—Cleveland! From my own backyard, I was greeted to daily fireworks starting in June, and going well beyond the fourth. As a new resident in Cleveland, I actually wondered if this was normal. Although there are no concrete explanations for this phenomenon, perhaps people just plain missed fireworks. With people stuck at home, this likely fuelled the daily displays, and increased fireworks sales.This year, with the Fourth of July approaching, the City of Cleveland has reminded residents that it is in fact illegal to set off fireworks in our city. However, with the state of emergency behind us, there is no need to be stuck at home this year. Several public events with fireworks, in and around Cuyahoga county, are planned for this year. Be safe, and have fun!