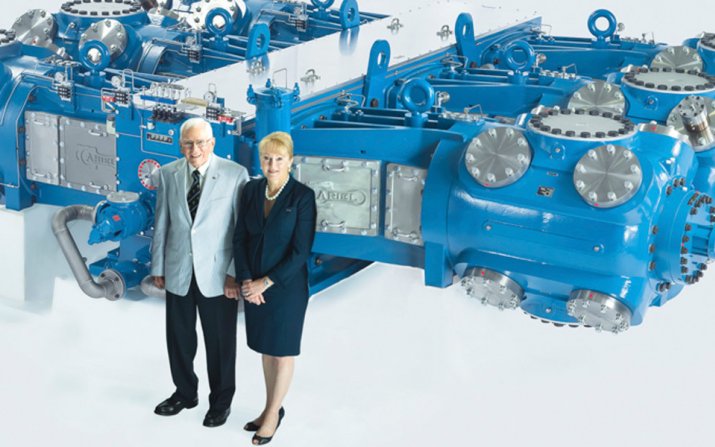 In 1952, Cleveland native James P. Buchwald (CIT ‘54) began working toward his second bachelor’s degree, this one in mechanical engineering at Case Institute of Technology. The degree set him up for a career that would impact his field—and the lives of thousands of Ohioans.

Now, his daughter and successor, Karen Buchwald Wright, has donated $1.5 million in his honor to support scholarships for undergraduate students from Ohio interested in pursuing engineering education at Case Western Reserve University—just as her father did nearly 70 years ago.

“James Buchwald was a trailblazer in mechanical engineering,” said Venkataramanan “Ragu” Balakrishnan, the Charles H. Phipps Dean of Case School of Engineering. “We are proud to call him an alumnus and honored to have his family’s continued support.”

After graduating from Case Institute of Technology, Buchwald took on jobs that taught him the practical application of his mechanical engineering degree and sharpened his knowledge of design and manufacturing. When a company contracted him to design a large horsepower compressor in 1965, Buchwald moved to Mount Vernon, Ohio, where he would go on to build a life, a family and the world’s largest manufacturer of natural gas compressors—Ariel Corp. He founded the company in 1966 with two friends and spent the next several years working out of his basement to create a prototype compressor.

Today, Ariel Corp. is still headquartered in Mount Vernon, with significant manufacturing facilities in Akron and Newark, Ohio. Buchwald’s impact on the oil and natural gas industry inspired his daughter to preserve his legacy at Case Western Reserve.

“My dad had a unique perspective on design when he started Ariel,” said Wright, “partly as a result of his early jobs and having to figure things out almost entirely on the run, and also from the education he received at Case Institute of Technology.”

Now in his 90s, Buchwald “is so proud of the legacy he bequeathed to his family and many, many others,” said Wright, who recently stepped down after more than 20 years as president and CEO of Ariel Corp., passing leadership to two of her sons. “Our long-running co-op engineering program allowed my father to share his design philosophy with dozens of young engineers over the years, and this scholarship will continue that work at Case Western Reserve.”

Wright established the full-tuition James P. Buchwald ‘54 Engineering Scholarship Endowment Fund to encourage potential mechanical engineers to impact the world like her father did—and to increase access to Case School of Engineering for students from small, rural towns in Ohio, particularly Mount Vernon, Akron and Newark. The first recipient of the undergraduate scholarship is expected to be selected next fall.

“This generous gift provides impactful support of our undergraduate education mission,” Balakrishnan said, “offering scholarship opportunities that will allow students to pursue their dreams of a career in engineering.”