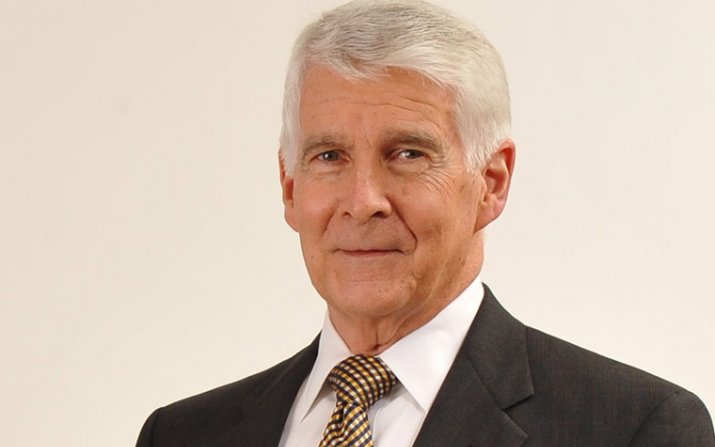 Decades later, Herbold, who earned his MS in mathematics in 1966 and PhD in computer science in 1968, has committed $2 million to endow an engineering professorship to recognize and support a faculty member who excels at teaching, builds new curricula and actively mentors students.

“Bob Herbold’s support for the Case School of Engineering has created outstanding opportunities for graduate students and strengthened efforts around computer and data science,” Interim President Scott Cowen said. “The focus of this new professorship—transformative teaching—highlights the profound effect that our faculty can have on student learning and, ultimately, graduates’ impact on society. We deeply appreciate this latest gift, and hope it will inspire similar commitments across our campus.”

A university trustee emeritus and recipient of an honorary doctorate, Herbold has committed more than $8 million to Case Western Reserve for scholarships and endowed professorship. As he considered how he might expand his impact at the Case School of Engineering, Microsoft’s former chief operating officer recalled the teachers and professors who motivated him as a student.

“I’ve been fortunate to learn from exceptional teachers such as John Flynn, who piqued my interest in mathematics in high school in Cincinnati, Professor H. David Lipsich at the University of Cincinnati where I received a BS in math, and Professor Richard Varga at Case Western Reserve,” Herbold said. “Professor Varga (a former faculty member in Case Western Reserve’s Department of Mathematics, Applied Mathematics and Statistics) was a tremendous mentor—so much so that I still speak to him several times a year.”

The Robert J. Herbold Professor of Transformative Teaching will be the first endowed professorship in the school’s history specifically assigned to a faculty member who uses an imaginative and engaging approach to teaching.

The inaugural professorship will be held by Harold Connamacher, professor of computer and data science. In 2019, Connamacher was honored with the Carl F. Witte Award for Excellence in Undergraduate Teaching for his impact in the classroom.

“Recently, I had an opportunity to monitor a class taught by Harold Connamacher and was really impressed,” Herbold recalled. “He was engaging and had amazing rapport with the students. He utilizes a customer-focused approach to teaching that creates curiosity and motivates students—coaching them to excel. Through this professorship, I hope to be able to recognize and reward teachers, like Harold, who are extraordinary in their field.”

Connamacher is excited about what Herbold’s investment could mean for the recently created Department of Computer and Data Sciences.

“As a department, we have discussions all the time about improvements we can make in students’ educational experience,” he said. “Through this professorship, we will have the resources to explore ideas to improve the computer science major and open access to students outside the major. I am very grateful to Bob Herbold for this gift, and I am humbled that I was chosen to be the recipient.”

Herbold helped establish the Department of Computer and Data Sciences through his work as a member of the engineering school’s Silicon Valley Think Tank, said Venkataramanan “Ragu” Balakrishnan, the Charles H. Phipps Dean of the Case School of Engineering.

“Dr. Herbold is once again transforming the school with this most recent gift, the very first endowed professorship recognizing innovative teaching in the Case School of Engineering,” Balakrishnan said. “And I could not have imagined a more worthy recipient than Professor Connamacher, who every day inspires, elevates, and transforms the lives of the students in his classes. I am deeply proud to have educators such as Professor Connamacher in the Case School of Engineering, and supporters like Dr. Herbold who recognize excellence in teaching and the impact it has on the student experience.”