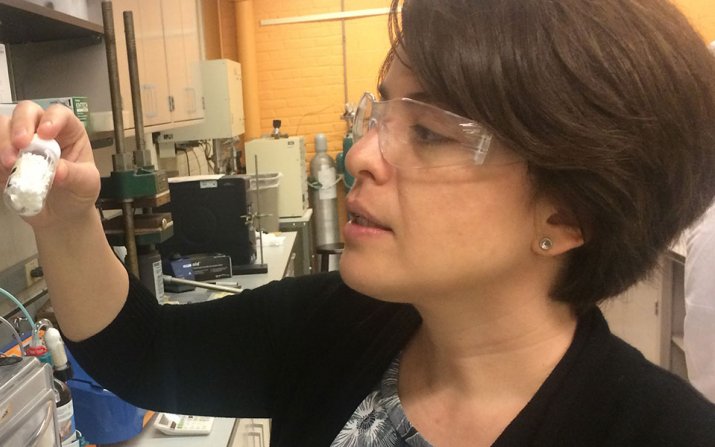 The NSF CAREER award is considered the agency’s most prestigious grant to junior faculty members.

Gurkan, the Nord Distinguished Associate Professor in chemical and biomolecular engineering, is among four Case Western Reserve scientists selected for the award this year—all from the Case School of Engineering. (The other researchers are being announced in separate stories in The Daily.)

“We are honored to have a deep bench of early-career researchers gaining recognition on a national level,” said Venkataramanan “Ragu” Balakrishnan, the Charles H. Phipps Dean of the Case School of Engineering. “I am thrilled to celebrate the achievements of our faculty, and am looking forward to seeing what the future holds for this outstanding group.”

Balakrishnan noted that Gurkan’s work is “incredibly highly cited” and said it “exemplifies the best of our early-career researchers in her novel and innovative approach to society’s biggest challenges, the impactful area of her study and in the meaningful ways she engages students and broadens participation in the engineering discipline.”

Gurkan said this NSF award will support a fundamental scientific inquiry that informs future design of systems that capture and convert certain gases into different types of fuels.

In this case, that research question asks how certain liquids Gurkan is testing—solvents she has named “HBOCs” (hydrogen-bonded organic complexes)—will form a structure on an electrode surface when an electrical charge is applied.

Gurkan will then determine how these HBOCs, which have high salt concentrations and high CO2 capture capacities, will help the reaction of CO2 conversion into fuels.

An artist’s rendering of Gurkan’s research at the molecular level. (Image by Emily Durst/scientific illustrator)

She’ll do that by mapping out the shape of the molecules where CO2, HBOCs and electrode meet to realize the CO2 conversion product.

“CO2 conversion by electrochemistry is a challenge that is more than 150 years old,” she said. “But most research has gone into using aqueous electrolytes to try to accomplish this. I am considering different liquids as an ‘out of the box’ approach.”

Gurkan said that understanding the interface, especially how the HBOCs help stabilize the CO2 near the electrode, is “critical for the design of energy-efficient systems for fuel production from waste.”

This research uses the electrode as the solid catalyst—a piece of metal in the same space as the liquid—to facilitate that CO2 activation, she said.

“Most electrolytes are salt and water, and they don’t hold much CO2 for the reaction,” she said. “But the liquid solvents I am using show much promise in making CO2 available at the interface where reaction takes place.”

That’s where the application could come down the road, Gurkan said, possibly in sensors and “other electrochemical processes that are responsive to the societal challenges of climate change, emission mitigation, waste utilization and energy.”

Gurkan also plans to work with students at the Cleveland Institute of Art to help visualize some of the project’s scientific concepts, a “learning by drawing” approach, she said. The illustrations could then be used as educational materials for publications, seminars and public events.