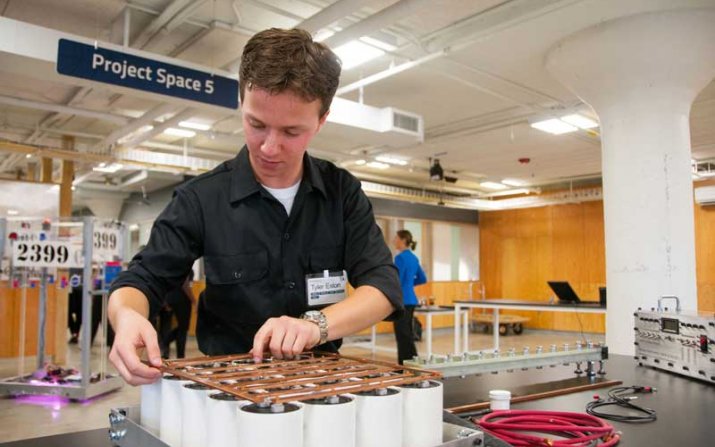 Last week officials, donors and students gathered on the southwest corner of campus to dedicate the Richey Mixon Building, a former storage space since transformed into a place for brainstorming, prototyping, business planning and more.

A full 50,000 square feet when complete, think[box] began nearly three years ago as a pilot effort in a space less than one-tenth as large. Yet during that time the space drew more than 100,000 visits and launched 20 startups—which in turn have attracted $2.5 million in funding.

“Our students have taken great advantage of this incredible resource,” President Barbara R. Snyder said. “They have created new companies, showcased device prototypes at the Consumer Electronics Show, and participated in maker fairs and entrepreneurial events hosted by the White House.”

The building’s name honors J.B. Richey, retired president of technologies at Invacare and creator of the first full-body CAT scan, and A. Malachi Mixon, retired executive chairman of the board of Invacare. Richey and Mixon together committed $5 million to the project.

“When we looked at this project, it really was an engineering project, a place where engineers could develop prototypes,” Mixon said during the dedication ceremony. “My thinking was a little more toward, let’s also make this an entrepreneurial center. Let’s make it a place where the resource groups that engineers need and entrepreneurs need could be housed in the same building.”

Last week’s ceremony marked the opening of the three floors that make up Phase One of think[box]:

Later this month the university will showcase think[box] nationally as part of Case Western Reserve’s Innovation Summit Oct. 26-28. The event features speakers such as Nolan Bushnell, founder of Atari; Curt Carlson, founder and CEO of SRI International; Jeff Hoffman, co-founder of Priceline.com; and Jim Clifton, CEO of Gallup, Inc. Those interested in more information can find it at case.edu/innovationsummit.

Many technology giants—Apple, Google and Hewlett Packard among them—trace their roots to a humble place: a garage or basement where a spark of an idea burgeoned into a product that transformed an industry. Alumnus Larry Sears (CIT ’69) tinkered in a Cleveland Heights basement while he was a student, and went on to found of Hexagram Inc. (now Aclara Technologies), which develops wireless meter-reading technologies for utilities.

“I owe whatever success I may have had as an entrepreneur to the extraordinary extracurricular learning opportunities that I had as undergraduate,” Sears said.

Case School of Engineering Dean Jeffrey Duerk noted the active use of think[box]’s pilot space not only by university students, but also members of the public and students from the Cleveland Institute of Art.

“For the region, I think it’s also important to think about what this facility means,” Duerk said. “It’s really an ecosystem going from ideation to creation to ultimately, on the upper floors, innovation and entrepreneurship and incubation.”

Scheduled to open next fall are floor 5—focused on project building—and floor 6—the Cloud L. Cray Jr. and Sally Hunter Cray Center for Innovation and Entrepreneurship, including The Burton D. Morgan Suite for Entrepreneurship and the Mandato Family Innovator Office. Following at a later date will be floor 1—the Nottingham Spirk Floor, focused on community programming and collaboration—and floor 7, with business incubator resources.

All told, the project will cost $35 million; fundraising continues today for the final phase. For more information about think[box], visit engineering.case.edu/thinkbox.