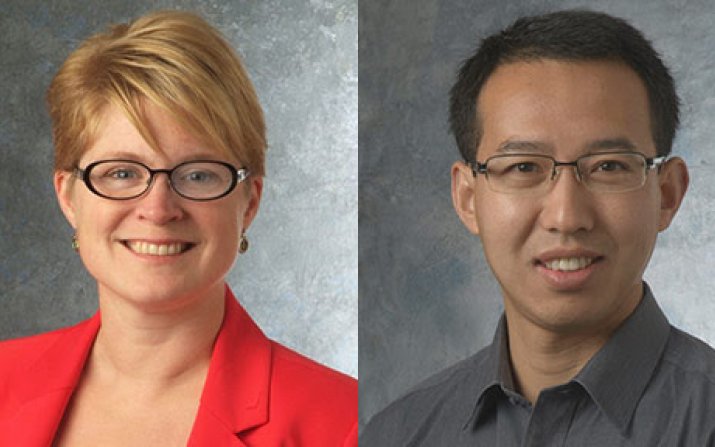 Two faculty members from the Case School of Engineering at Case Western Reserve University were named among the nation’s most promising young scientists earlier this month.

President Donald Trump on July 2 named Jennifer Carter, an assistant professor in the Department of Materials Science and Engineering, and Philip Feng, an associate professor in electrical engineering and computer science, as recipients of the Presidential Early Career Award for Scientists and Engineers (PECASE).

Established in 1996, the PECASE acknowledges contributions scientists and engineers have made to advance science, technology, education and mathematics (STEM) education and to community service through scientific leadership, public education and community outreach. The White House Office of Science and Technology Policy coordinates the PECASE with participating departments and agencies.

“Jennifer and Philip’s respective research represents some of the school’s most innovative work in advanced materials and smart systems,” said Venkataramanan “Ragu” Balakrishnan, the Charles H. Phipps Dean of the Case School of Engineering. “These prestigious awards are a well-deserved recognition of their incredible individual accomplishments and potential, and a reflection of the deep pool of expertise at the Case School of Engineering. It’s an honor for our institution to be recognized with two PECASE awards in the same year.”

Finding the ‘next new material’

Carter’s research has focused on “understanding microstructural evolution and performance of interface-rich materials.” What that means, she said, is similar to what a blacksmith did to a horseshoe in the 19th century or a sword in the 15th century: “We heat it and we beat it,” Carter said, referring to the manipulation of the makeup of any given material, especially metals.

The difference is that the blacksmith wasn’t likely aware of the “why” behind the process or the “properties of the structural materials,” while Carter and company “start from atoms, move up through structure and can pretty much make any material—in theory, at least.

“My real love is the mechanisms that cause structural materials to fail at high temperatures,” she said. “What happens to materials at high temperature is the linchpin of almost all of our energy needs. We see it in our car engines, jet engines, nuclear power and in turbine systems everywhere.”

So discovering the “next new material” is part of what drives her as a researcher: “The crux, the holy grail is finding a room-temperature superconductor. Do that and you can build ‘The Enterprise’ (the spaceship from Star Trek), but even apart from that, it’s building the next fuel-efficient engine that changes things.”

In 2016, Carter also received the Bradley Stoughton Award for Young Teachers from ASM International (formerly the American Society for Metals) for her dedicated and effective instruction and mentoring of students and her impact on undergraduate education.

“It may sound cliché, but I love ‘seeing the light go on’ when you’ve reached a student,” she said. “It’s then that they realize the world is so much larger than they originally thought.”

Feng’s work has been focused in part on understanding the device fundamentals and engineering principles of two-dimensional (2-D) semiconducting crystals and heterostructures made of stacks of various 2-D materials.

Feng’s research is helping to lay a foundation for developing atomically thin signal processing devices and systems with new features that may not be accessible with devices based on conventional 3-D crystals.

What that means in the long run isn’t always evident at the start, he said.

“This is an exciting but nascent field,” Feng said. “While such fundamental research might not appear profitable in the short term, I find it intellectually challenging and fascinating. I believe that understanding and manipulating information transduction down to atomic scale—in some smallest structures we can build with new materials—will be foundational to developing devices for future information technology.  I’m thankful to a group of excellent students and post-docs who chose to believe in my vision, and grateful to my mentors and collaborators for their inspiration and encouragement.”

Carter and Feng join two previous Case Western Reserve professors in receiving the awards while on the university faculty. Suchitra Nelson, professor and assistant dean for clinical and translational research in the Department of Community Dentistry at the School of Dental Medicine, won the Presidential Award in 2007 and Jeffrey Capadona, associate professor of biomedical engineering and a research health scientist at the Louis Stokes Cleveland VA Medical Center, won in 2012.

Feng and Carter were both named to the award through their work funded by the National Science Foundation (NSF). Both had previously received the Faculty Early Career Development Award from the NSF in 2016 and 2015, respectively.

They’ll receive their PECASE awards with about 300 other winners selected from the three-year period of 2016-2018 during a ceremony at Daughters of the American Revolution, Constitution Hall, on today (July 25)  in Washington, D.C.