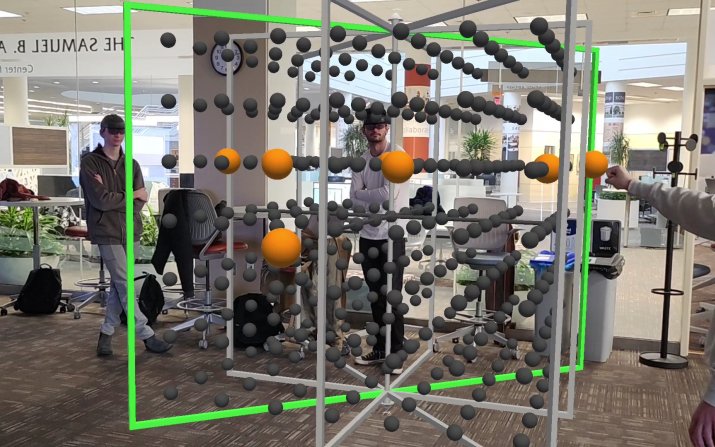 It’s not everyday you walk into a classroom and see students using mixed-reality headsets to learn new concepts. This semester, three classes in the Case School of Engineering incorporated the HoloLens technology into their lesson plans, allowing students to learn in a new, highly visual and interactive way.

Michael Hore, associate professor of macromolecular science & engineering, is teaching Physical Chemistry for Engineering and with the use of mixed-reality, the third- and second-year macromolecular and biomedical engineering students can look at a polymer from a new angle. To kick off class, he displayed just one molecule.

“A student actually laid on the ground and was looking up through it,” Hore said. “It was pretty cool.”

In a normal classroom with a whiteboard, it’s challenging to really show the shape molecules take, which Hore says is a vital concept for students to grasp given that the shape a molecule takes affects everything. To really bring home his point, Hore then displayed billions of molecules.

“I told the students, ‘Okay, this is just one molecule. Now, if this was a real sample, there would be billions of these molecules, and they would all have slightly different shapes and slightly different links. Not only that, they move and they're constantly jostling around in solution.’”

When he hit the switch to change from one molecule to many, and added in animation, he heard gasps.

“Instead of me just trying to squiggle on the board, which is what I usually do,” he said. “When they actually see it, they see that the molecule that we talk about in class doesn't actually quite represent the right shape. So it's hopefully clearing up some misconceptions that persist.”

Alp Sehirlioglu, associate professor of materials science & engineering, has had similar reactions during his materials science class where he teaches concepts related to crystallography and three-dimensional (3D) symmetry.

“It is known as one of the most difficult topics in materials science and engineering,” he said. “We are hindered by the use of two-dimensional media like powerpoint slides and screens to teach 3D concepts.”

After learning about the HoloAnatomy technology over five years ago, Sehirlioglu was inspired to explore how the technology could expand his teaching techniques and benefit student learning. With the help of a computer science student, Sehirlioglu developed an app that builds crystal structures using the 3D symmetry elements and started teaching a lecture on crystal systems, symmetry and their application in piezoelectricity and ferroelectricity.

Recently, he developed a second application that launched in November. This time, it is a 3D symmetry game that can be played with no knowledge of crystallography or materials science and students in his Multiscale Structural Control of Functional Materials class benefited.

“The HoloLens lecture was one of the highlights of any course I’ve taken at Case [Western Reserve] so far,” one student said. “I’ve figured out that I’m a very visual learner and I think that lecture helped me understand crystal systems and polarity much easier than when seeing it on paper.”

Teaching with datasets that are often much more complex than what can be expressed in 2D, Laura Bruckman, associate professor in the Department of Materials Science and Engineering, decided to build a course that tapped into the capabilities of the HoloLens.

“I taught a data visualization class and I was very interested in how visualizations would look and change a student's perspective if they moved beyond the screen in which we typically look at them,” Bruckman said. “Animation and interactive visualizations on a computer are still missing the engagement from the audience or the viewer. I thought Hololens might give us that.”

To utilize HoloLens in the classroom, professors must build out the code necessary to create the visualization for the class to interact with once their headsets are on. Unlike other courses, Bruckman’s students were actually doing the coding live in the classrooms and generating their own visualizations.

There was something else students learned: for this assignment, there was no right answer. Rather, students were encouraged to think of it as a playground where they could tap into their creativity and experiment in an attempt to build something.

“Failing was fun and we got to fail together as a group,” Bruckman said. “When someone got a visualization to work everyone cheered.”