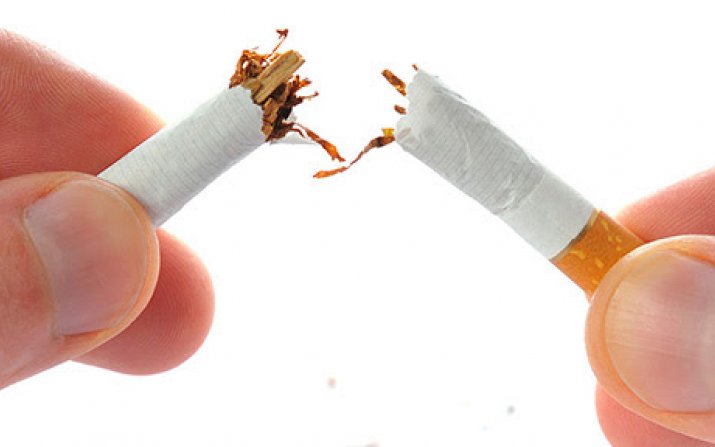 There is no shortage of products or programs—from nicotine gum to hypnosis—to help people stop smoking. More recently, wearable technology has gained popularity in the fight against addiction.

But the mobile alert system Case Western Reserve researchers are testing may be the first that combines:

The system was conceived, developed and tested over the course of the last year by a team of electrical engineering and computer science researchers at the Case School of Engineering and a high school intern in collaboration with a clinical psychologist at the Case Western Reserve School of Medicine.

A paper detailing the system and reporting early findings on a group of 10 users was published in a July edition of Smart Health. The researchers said most previous studies have relied on smokers self-reporting how often they smoked, while the Case Western Reserve system more accurately tracked smoking activity based on the sensors.

“We’ve been able to differentiate between a single motion, which could be confused with eating or drinking, and a sequence of motions more clearly linked to the act of smoking a cigarette,” said Ming-Chun Huang, an assistant professor of electrical engineering and computer science who led the technical aspect of the study.

The collaboration to develop a technology-enhanced, personalized, mobile smoking-cessation system started after a conversation last summer between Huang, who was looking for a new project for his students, and Monica Webb Hooper of the Case Comprehensive Cancer Center, who was seeking new ways to help her clients break the habit.

“The field of tobacco control has really adopted mobile technologies because many people won’t come in for therapy,” said Webb Hooper, who has been working on interventions for nearly two decades.

“We were interested in translating one of our programs into a video-based mobile application, but the motion sensors made this even more amazing,” said Webb Hooper, who has extended the study to another 120 smokers—half using the program and a control group using a standard text messaging program without sensors or video messaging.

Tobacco smoking is responsible for one of every five deaths in the United States, according to the Centers for Disease Control and Prevention. Other research has shown there are more than 7,000 chemicals in cigarettes, including carbon monoxide, hydrogen cyanide and nitrogen oxides in cigarette smoke.

Further, the National Cancer Institute reports that there are 69 known cancer-causing agents in tobacco smoke.

“Tobacco is the toughest of all addictions to overcome and cigarettes are one of the easiest drugs to become addicted to—all it takes is three (cigarettes) for some people,” Webb Hooper said. “And, neurologically, it’s harder to quit because we have more nicotine receptors in the brain. That’s why I’m so excited about this intervention.”