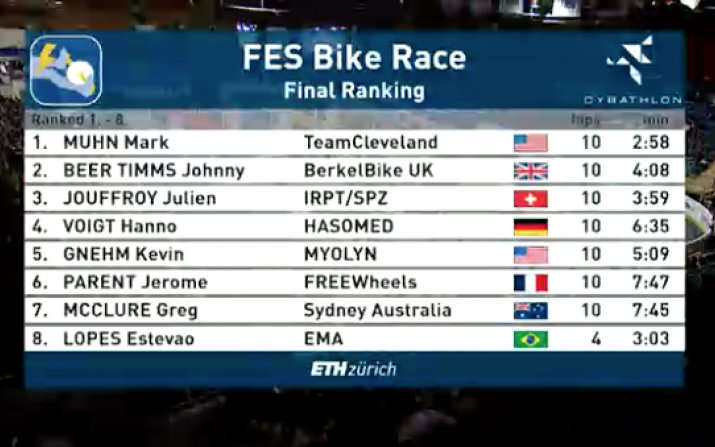 In front of a sold out arena of 4,600 fans, Mark Muhn pedaled his way to victory in a record time of 2:58 in the functional electrical stimulation bike race at the first international Cybathlon (“Cyborg Olympics”). Paralyzed by a spinal cord injury and powered by contractions of his own muscles activated by surgically implanted neural stimulators developed by researchers at Case Western Reserve University and the Louis Stokes Cleveland VA Medical Center, Muhn rode a recumbent Catrike® in head-to-head races around a 750 m track at the SWISS Arena in Kloten, Switzerland.

Team Cleveland, led by Ronald J. Triolo, a professor of orthopaedics and biomedical engineering at Case Western Reserve and director of the Advanced Platform Technology (APT) Research Center at the Louis Stokes Cleveland VA Medical Center, was one of 12 international stimulation-driven biking teams competing in the Cybathlon.

This summer, Muhn competed with four other racers—or pilots as they’re called—in time trials held in Cleveland Heights for a chance to win one of two spots on Team Cleveland’s Cybathlon team. He and fellow Californian Michael McClellan raced the fastest times and traveled to Switzerland to for the chance to compete in the Cybathlon on Oct. 8. Ultimately, Muhn was designated as the pilot and brought home another victory for Cleveland.