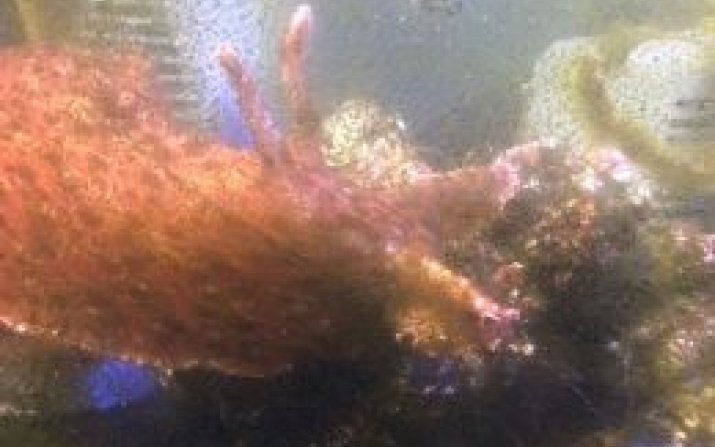 As 2-pound sea slugs tug and feed on bits of seaweed, researchers from Case Western Reserve University and around the world are mapping their brains and cataloguing their corresponding muscle movements.

The purpose: To better understand brain-muscle interaction in our own human bodies.

With that knowledge, scientists believe they might be able to develop more responsive prosthetics and even more adaptive flexible robots, said Hillel Chiel, professor of biology, neurosciences and biomedical engineering at Case Western Reserve.

The researchers, led by Chiel, are being supported with a new $500,000 grant from the National Science Foundation.

The researchers are studying the shapeless and primitive sea slug (Aplysia californica) because it has only about 20,000 neurons—and only a few hundred controlling its tongue-like organ known as a grasper.

Humans, on the other hand, have billions of neurons working in their brains, making it very difficult to discern what neural activity is directly related to specific muscle movements, Chiel said.

But the scientists can precisely pinpoint changes in the sea slug nervous system that occur as the animal attempts to feed on something that is unusually tough or unusually soft and large because they read which neurons are associated with specific movements of the grasper as the slug tugs at the seaweed.

“So the goal is to actually work out the circuitry in this much more tractable organism, to see what happens to the neurons and the musculature at the same time,” Chiel said. “We don’t really know how we humans do what we do on a moment-by-moment basis as we quickly change our behavior when the world around us changes.”

For example: You’re walking along the street and suddenly hit an icy patch or a hole in the sidewalk, and without thinking about it, you quickly catch yourself from falling, adjust your stride and keep walking.

“How does that even happen?” Chiel asked. “That’s actually a deep fundamental scientific question about behavior and abilities we take absolutely for granted—one of those things you don’t realize how amazing it is until you lose it or if you’re trying to program that kind of ability into a robot, for example.”

For that reason, Chiel said the continuing research might be especially useful for devising flexible, biologically inspired robots akin to those being developed by Roger Quinn and Kati Daltorio in the Department of Mechanical and Aerospace Engineering at the Case School of Engineering with whom Chiel has been working for many years.

New ways of controlling the nervous system could also come out of this research, Chiel said.

Chiel is working with Cynthia Chestek, an associate professor at the University of Michigan, who has developed a novel technology to probe neurons.

Chestek and her team are using carbon fibers that are thinner than human hairs to create devices that look like miniature combs that can be pressed into the collection of nerve cells. The devices pick up what the nerve cells are “saying” to one another—their electrical activity—and then contribute to the conversation by turning them on or off.

In the future, such devices could be used to create new ways of controlling prosthetic arms or help restore function after a stroke, Chiel said.

Working out the details of circuitry could also provide blueprints for control of much more flexible soft grippers that could handle soft, irregular, wet and slippery materials, just as the slugs are able to feed on seaweed, which comes in many different shapes and sizes.

Also involved in the most recent research with Chiel and Chestek are: