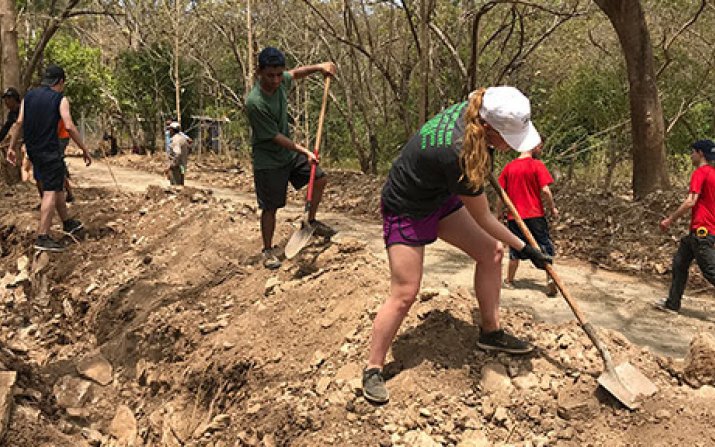 For residents of one Costa Rican village, the main source of water had to travel from a well to a storage tank through a leaky pipeline. As a result, the community endured frequent water shortages, sometimes for weeks on end. Just over 2 1/2 years ago, a group of students in Case Western Reserve University’s Humanitarian Design Corps (HDC) organization set out to change that.

And this week, those students are spending spring break putting the finishing touches on a new pipeline that will improve the water-system infrastructure for the village of about 250 people.

HDC is an interdisciplinary group that works to provide underserved communities around the world with sustainable solutions. The Costa Rican project is one of three international initiatives; the others are in the Dominican Republic and Malawi.

HDC students heard about the community in Costa Rica’s Guanacaste Province through a connection of Kurt Rhoads, associate professor of civil engineering, and a nonprofit working in the region. Immediately, they knew they could do something to help.

“The needs of the community and the skills and the passions of the students really aligned well,” said Neil Chavan, a senior majoring in chemical engineering and environmental studies with a minor in Spanish. Chavan served as the project lead until this semester, when he handed off the responsibility in anticipation of his upcoming graduation.

Since officially launching the project in July 2016, the team has made two previous visits to Costa Rica, with each trip serving a specific purpose.

In January 2017, the students evaluated the issues with the water system, led activities around sanitation and hygiene, and spent time getting to know the residents of the village.

During that visit, members of the community welcomed students into their homes without ever having met them before. Though many of the students didn’t speak Spanish, some—including Chavan—knew enough to begin forming more personal relationships.

“It became apparent how much the people needed this, how willing they were to work with us, and how open they were to us working with them,” Chavan said.

After designing a new underground pipeline to bring water to the community, the students set out to install it in March 2018. They also taught residents to how install pipes and fix issues that may arise.

The students spent five days installing the first kilometer. Community members finished the second kilometer of pipeline after the students left with the knowledge that the team had passed on to them.

After installing the new pipeline, the work on the system did not stop there.

Back in Cleveland, the team brainstormed ideas for improving the water system with three sub-groups dedicated to different aspects of the project: erosion control, pipe repair and replacement, and system mapping and monitoring.

This week, the team will repair sections of the pipe infrastructure, install water meters to track water usage, conduct tests to evaluate water quality, and assess the system for any new damage. The team’s goal is to have the system fully functional by the end of their trip.

HDC plans to continue its work in the village even after the pipeline is finished and structurally sound. Though next steps aren’t fully determined yet, the group is considering exploring issues with the village’s well, treating water quality issues, and possibly teaching residents water-conservation techniques.

Chavan attributes the past success of the project to strong collaborations between the student team, faculty and staff at CWRU, engineers in the Cleveland area, and (most of all) the village residents. Despite the language barrier, the students and community members have bonded during each trip. Now they routinely communicate via WhatsApp and update each other about each other’s lives.

“You do become close with the people that you’re helping out, and it’s not just an ordinary school project or volunteering project,” Chavan said. “This is a long-term, multi-year relationship that we’re fostering. I think that’s really special.”