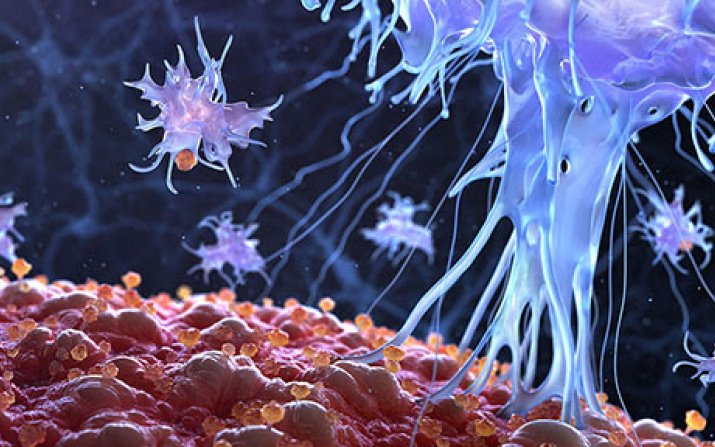 Researchers at Case Western Reserve University have discovered how to quickly and accurately predict which lung cancer patients will benefit from chemotherapy by analyzing how immune cells the body sends out to fight the disease are arranged.

The scientists—aided by smart-imaging computers and machine-learning methods—were able to swiftly analyze hundreds of tissue images to not only count cancer-associated immune cells—but identify patterns in how they were arranged.

This information may, after validation studies and clinical investigation, someday assist in the decision about which patients need chemotherapy or immunotherapy based on computational analysis of routine tissue-slide images obtained either by surgery or biopsy, said Anant Madabhushi, the F. Alex Nason Professor II of biomedical engineering at the Case School of Engineering.

“We believe we’ve made a critical advance to the field with this work,” said Madabhushi, the lead among a dozen authors on a recent paper about the work. “Do you need chemo or not?—that’s the direct benefit to the patient and what really matters.”

“That’s why I’m super excited about this: It’s a validation of what we call the ‘spatial architecture’ of the immune cells as predictive for the success of treatment for lung cancer,” he said.

Oncologists and pathologists routinely take a tissue sample of cancer cells and then capture an image of that tissue.

But the advent of deep-learning and machine-learning algorithms has allowed researchers to find patterns among the cells that would otherwise be nearly impossible for the human eye to detect.

Most often, that means analyzing cancer cells themselves, or with limited success, counting the white blood cells—called tumor-infiltrating lymphocytes—which the body sends out to battle the disease.

“One of the big problems is that cancer generally masks the immune response, which is why, to the body, cancer doesn’t present as a foreign invader,” Madabhushi said. “But it does evoke a partial response of the immune system—not successful enough to defeat the cancer, but enough for us to see and measure.”

For that reason, pathologists have been trying for the last 10 to 15 years to better understand how that immune response might correlate to how the cancer would spread or how the patient would respond to certain therapies—or whether the patient even needs the invasive and painful chemotherapy routinely given to virtually all victims.

“But doing that manually is cumbersome, because there are hundreds of thousands of lymphocytes, and it’s difficult to determine a pattern,” Madabhushi said. “Our group has found a way to train the machine to find the lymphocytes and decipher their arrangement, their spatial architecture—and predict disease outcome.”

Madabhushi was joined by Case Western Reserve colleagues Xiangxue Wang, Yu Zhou, and Cheng Lu from his Center for Computational Imaging and Personalized Diagnostics and Pingfu Fu from the Department of Population and Qualitative Health Sciences.

Since 2016, Madabhushi and his team have received over $9.5 million from the National Cancer Institute to develop computational tools for analysis of digital pathology images of breast, lung and head and neck cancers to identify which patients with these diseases could be spared aggressive radiotherapy or chemotherapy.