Addressing mismatch of affordable housing and jobs with community-driven innovation

Sears think[box] helps put a puppy back on his paws 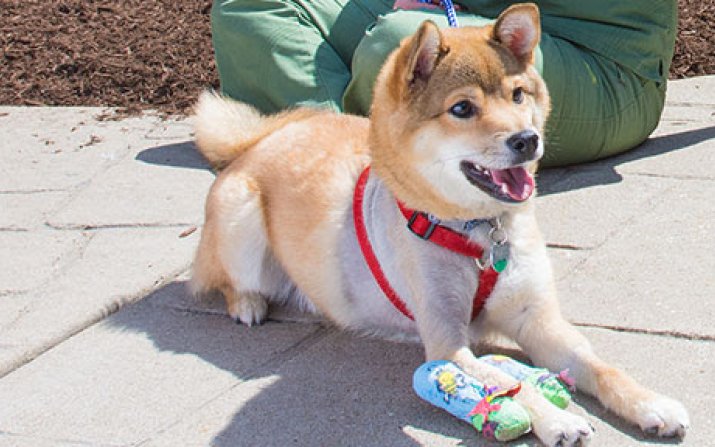 As a 3-month-old puppy for sale at a northeast Ohio pet store, Bento was accidentally dropped—breaking a front leg that healed crooked and weak.

An anonymous benefactor offered to pay for Bento’s surgery, saving the male puppy from euthanasia and putting him in the care of a veterinarian who saw a second chance for the spunky Shiba Inu-American Eskimo mix—and also saw potential complications from a tricky deformity.

“Bento’s poor leg looked like a flipper,” said Andy Law, a staff surgeon at VCA Great Lakes Veterinary Specialists in Warrensville Heights. “We needed to get creative to help him.”

Being so young, Bento’s bones were still growing fast, aiding the case for letting the dog develop more before an operation.

Yet, the leg was worsening, becoming increasingly misaligned and leaving Bento at risk for a permanent disability.

Having just re-located to Northeast Ohio, Law learned of the seven-story, 50,000-square-foot building—and its open access to the public—with a simple internet search.

“I’d never had a veterinarian come in and ask about 3-D printing,” said Malcolm Cooke, executive director of Sears think[box] and an associate professor of mechanical and aerospace engineering at Case Western Reserve. “I thought, ‘Let’s try help this poor little puppy.’”

Unlike most medical scans—which are presented flat on screens—the 3-D-printed models allowed Law and his team to more thoroughly examine Bento’s injuries and brainstorm about their next steps.

“Being able to flip the model around in our hands and see all angles of the leg was truly helpful—especially comparing Bento’s injuries to a model from a healthy puppy,” Law said.

To avoid the risk of further damaging Bento’s already-brittle bones, surgeons decided against placing screws, plates or other hardware inside his leg. Instead, they built a sturdy and flexible frame for the leg’s exterior, setting the custom device into place with tiny pins.

“The 3-D model made it clear we should pursue less invasive path,” Law said, “even if it meant Bento might have to wear the ‘cone of shame’ for longer.”

Not only was Bento’s procedure shorter than alternatives, surgeons were able to use less anesthesia and make fewer incisions, lessening the puppy’s chances for an infection.

“Within a matter of days, he was putting weight on the leg, and soon all he wanted to do was run around and be a normal, happy puppy,” said Emily Conway, a veterinary ophthalmologist, also at VCA Great Lakes Veterinary Specialists, who adopted Bento. “All signs point to him maintaining regular leg function throughout his life.”

In recent years, Cooke and Sears think[box] have also worked with surgeons at the Case Western Reserve School of Dental Medicine and University Hospitals Cleveland Medical Center to produce 3-D-printed models of skulls, ankles, wrists and other anatomy for research and training residents.

“For many surgeons, there hasn’t been something quite like this available before,” Cooke said.

“When we work together, they can look over our shoulder and tell us exactly what will help them in the operating room.”

The range of services available at Sears think[box] and the precision of the 3-D printing allow for an accurate mimicking of both hard tissues, such as bones, and soft tissues, such as ligaments, veins and even tumors, he said.

These models helped reduce the stress of patients, surgeons have told Cooke, by helping illustrate what will happen during procedures.

“This is the beginning of something,” Law said. “The sky’s the limit of what we can achieve with this kind of collaboration.”