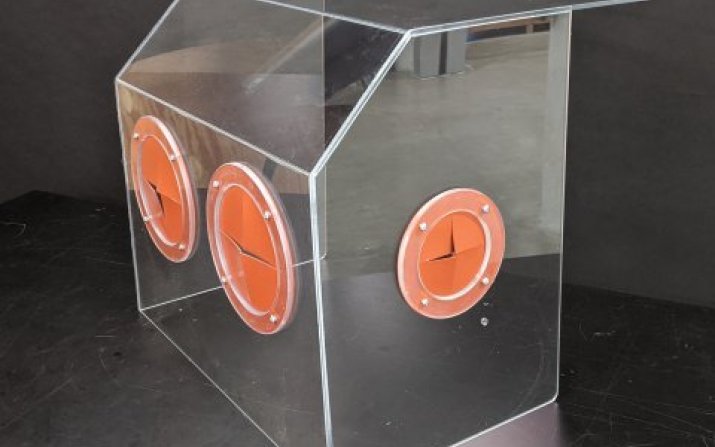 Northeast Ohio health-care workers on the front lines in the fight against COVID-19 are benefitting from innovative devices being developed by engineers at Sears think[box], Case Western Reserve University’s signature public maker space, and physicians at University Hospitals (UH) health system in Cleveland.

Two of the more recent innovations are already in use by health-care workers at the hospital system:

“Every idea that we’ve worked on at think[box], including these two with University Hospitals, has been focused on protecting people in the healthcare field who need it the most—and need it quickly,” Charnas said, noting think[box] engineers are working on a variety of other projects with other collaborators, in addition to partnering with the hospital system and UH Ventures.

UH Ventures, the innovation and commercialization arm of UH, has served as a catalyst in bringing teams together across the state to collaborate and reimagine existing tools while strategizing opportunities for new deployments in the fight against COVID-19. 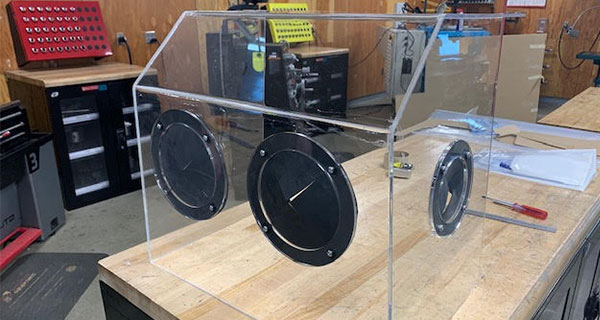 A closer look at the finished version of The Cleveland Intubation Box.


The initial concept of the intubation box came from Taiwan; however, Brian Rothstein, MD, a pediatric neurosurgeon at UH, in conjunction with a team of UH anesthesiologist colleagues, made several design modifications to enhance usability and prevent disease spread.

“Working with the think[box] team has been an absolute privilege,” Rothstein said. “They are an incredibly thoughtful and creative group who has jumped head-first into the deep end of COVID. Their ingenuity and collaboration has been a key driver in the success of these projects.”

Rothstein worked closely with Manny Bansal, a design and manufacturing engineer at think[box], to develop the box with these new features:

“The whole think[box] team knew this was our opportunity to help people on the front lines,” Bansal said. “Our main goal was to get these projects done quickly and in the hands of the doctors and nurses and others who need them.”

Bansal said the engineers worked closely with UH staff—first sharing a sketch, then a full-size cardboard model and finally several clear-plastic versions that eventually resulted in the polycarbonate version now in use.

“They would take what we would give them, pass it around and test it for form, fit and function and get it back to us to improve again,” he said. “They’re contribution was incredibly important.”

The design, which can be downloaded on the think[box] website, was developed in partnership with think[box]; UH Ventures; MAGNET; Die-Cut Products; and House of Plastics.

“The opportunity to cross-collaborate with our institutional partners and leverage our NEO innovation ecosystem for positive social impact in the fight against coronavirus has been inspirational,” said David Sylvan, president of UH Ventures. “We have a shared mission to care for our community and when we share best practices and intellectual capabilities we all benefit from this bridge building.”

Similarly, the eye-shield project began with a UH doctor who identified a problem and devised a solution.

Richard Helms, MD, PhD, a resident physician at UH, noticed a need for protection for ophthalmologists. Commercial shields were available but in short supply, so he made some diagrams and put in a request for 20 shields on April 3 to the think[box] team.

Two days later, 20 new shields were delivered to the hospital.

“Since my days as a medical student at Case Western Reserve, I have tapped into the broad resources available from think[box],” Helms said.  “And now as a UH physician, to have them working in concert with the UH Ventures innovation team is an immeasurable asset which benefits not only physicians, but also our community as a whole as we all work to keep patients and providers safe.”

Those two potentially lifesaving devices, as well as a handful of others in earlier stages of development and still being tested, follow after the late-March launch of the production of face shields developed by think[box] engineers and partners at Nottingham Spirk and Penn State Behrend.

All the devices were conceived, designed and produced over the last several weeks by a diverse team of doctors, scientists and engineers—including faculty and students—from the university and Northeast Ohio hospitals, said James McGuffin-Cawley, senior associate dean at the Case School of Engineering at Case Western Reserve.

“The reputation of think[box] in the community at large played a role, too,” he said. “People turned to this university and to think[box] because they knew that there were ideas there, but also because they have the ability to turn those ideas into actual, workable products that can help people.”

McGuffin-Cawley said staff either worked on projects from home when possible, but also came into the seven-story think[box] building on the Case Western Reserve campus, when necessary, while following strict social-distancing protocols.

“We had student volunteers who would come to pick up products left outside the think[box] door and take them home to finish them,” he said. “It’s been an amazing level of teamwork.”