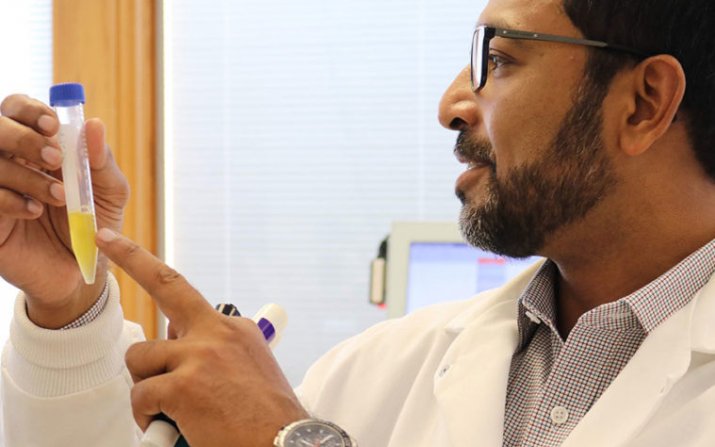 A Case Western Reserve University scientist, who has for more than a decade pioneered research into synthetic platelet substitutes, has been awarded a $3.8 million grant by the U.S. Department of Defense (DOD) to develop freeze-dried artificial platelets that can treat bleeding in wounded soldiers in the battlefield before they can be taken to a hospital.

Anirban Sen Gupta, professor in Biomedical Engineering at the Case School of Engineering, will work with collaborators at the University of Pittsburgh for in vivo testing and manufacturing partners at Haima Therapeutics, a biotechnology company he co-founded in 2016.

Since 2007, Sen Gupta and his lab have worked on a variety of platelet-inspired technologies along with other projects in drug delivery and nanomedicine. This new work builds on some of that research.

Blood supply on the battlefield

Sen Gupta’s idea is to get life-saving synthetic platelet technology closer to soldiers on the battlefield when they need it most.

“Reducing the time gap between when severe injury happens and its treatment becomes possible is critical for survival, and platelets—because they help clotting and stop bleeding—can improve that time,” Sen Gupta said.

Right now, military access to platelets and other blood products are very limited in the field and those products are  transported as liquid in specialized bags which further limit portability and access.

“A soldier already carries 60 to 100 pounds of gear, so the goal is to make a synthetic platelet product that is easily portable as low weight and volume, so that it fits into the soldier’s carrying load.”

One way to do that: Freeze-dry the artificial platelets into a powder that can be stable at various temperatures and mixed on demand with saline already carried by the soldier.

“So, if we can optimize and scale up the technology of freeze-drying artificial platelets while preserving bioactivity, we’ll have succeeded,” he said.

Sen Gupta and his team are looking to nature for examples in preserving bioactivity at extreme dehydration and temperatures.

“We know there are certain species, such as brine shrimp, which utilize natural sugars to exist in extreme weather and dehydration conditions while maintaining full functionality” he said. “We are drawing our cues from such phenomena as we develop methods for freeze-drying artificial platelets that will remain bioactive.”

The DOD award will enable Sen Gupta to recruit new students and researchers to focus on this specific technology development. His lab now has about 15 members—10 undergraduates and five graduate students.

Blood has four main components: plasma, red blood cells, white blood cells and platelets. Platelets help the blood-clotting process by gathering at the site of an injury, sticking to the lining of the injured blood vessel and clustering with each other, forming a plug that stops bleeding by facilitating blood coagulation. That function makes platelets invaluable to anyone who is bleeding profusely.

Meanwhile, Haima announced on its website in April that it has been awarded new funding from the National Science Foundation (NSF) to scale up the manufacture of SynthoPlate, a synthetic platelet surrogate to treat hemorrhage.

“That’s the Holy Grail we’re trying to get to—a completely bio-artificial whole blood,” Sen Gupta said. “Such products would address the shorter shelf-life of natural blood products and would also address blood shortages everywhere, especially in pandemic and mass-casualty scenarios when resources are either limited or medical professionals are overwhelmed.