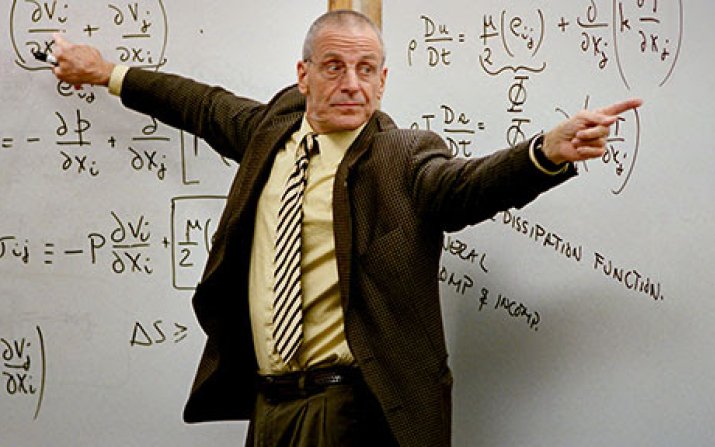 Prahl, 75, a professor and researcher with great expertise in dynamics, fluid mechanics and thermodynamics, died April 19 at his home in Cleveland.

He had spent four decades at Case Western Reserve in the Case School of Engineering’s Department of Mechanical and Aerospace Engineering, teaching countless students in his inimitable, theatrical style—helping 40 of them with master’s or doctoral theses and conducting valuable research in fluid and thermal science supported by a host of federal agencies, while publishing more than 20 refereed journal articles.

Most recently, Prahl was appointed in 2007 as Case School of Engineering’s first faculty director for undergraduates. Previously, he was chair of the Department of Mechanical and Aerospace Engineering from 1992 to 2007.

Perhaps Prahl’s most recognized work was for the United States space program.

His association with Cleveland’s NASA Glenn Research Center began in 1970; he took a leave of absence from the university from 1990 to 1992 to work as a payload specialist at NASA Marshall Space Flight Center in Huntsville, Ala.

That included the 13-day Columbia mission in June 1992, when Prahl helped with more than a dozen experiments in areas such as crystal growth, fluid physics, combustion, bioprocessing, space-acceleration measurement and the effects of extended duration orbit on the human body.

He also assisted in experiments in combustion, surface tension, droplet dynamics and crystal growth. His background in surface-tension-driven flows and combustion played a role in his selection by NASA as a payload specialist for the mission.

He also worked with support from NASA Glenn Research Center on studies in tribology and oil-free turbomachinery; in the chemical kinetics of hydrogen-oxygen and propane-air systems; and in the use of mechanical seals for turbomachinery and space craft docking systems.

It was in Huntsville where he met fellow fluid dynamics researcher Iwan Alexander, who he recruited to join him at engineering school. Alexander is now dean of the University of Alabama School of Engineering.

“Let’s say we would regularly talk thermodynamics and fluid dynamics over a glass of beer at Nighttown,” Alexander said. “We literally would draw up problems on the backs of menus.

“But during my time at Case (Western Reserve), he also taught me a lot about how to teach. He would even show up in the back of my classroom, just to and ask difficult questions.”

While Prahl never personally made it into space, his earthbound impact was undeniable, colleagues said.

“He’s the reason I’m here today,” said Paul Barnhart, a professor of mechanical and aerospace engineering. Barnhart said he knew Prahl first as a professor, then mentor, then friend—and finally as a colleague when he joined Prahl on Case Western Reserve faculty.

Barnhart said what really set Prahl apart was his commitment to students.

“I owe him over and over again, and it’s a debt I could never repay,” he said. “Joe was the kind of guy who would drop whatever he was doing to give you his full attention—and he was that way with everyone. He was just a down-to-earth, unique man.”

Barnhart said Prahl was a performer in the classroom.

“He was theatrical, that’s for sure, and no one ever missed his class,” he said. “He would run back and forth at that board explaining the concepts of fluid dynamics. It could be confusing, but it was always entertaining.”

Barnhart also said Prahl was “a gifted man on the water,” taking many trips to Canada across Lake Erie in his 30-foot sailboat, “Seabird,” but also sailing the Caribbean.

With the exception of those two leaves of absence—the first to become a visiting lecturer and research fellow at Harvard in 1974—Prahl had been a fixture at Case Western Reserve since being named professor in 1985.

His research focus was on experimental observations in fluid and thermal science and was supported by a number of federal agencies, from the National Science Foundation to the Environmental Protection Agency to National Bureau of Standards Center for Fire Research.

Prahl graduated in 1960 from Phillips Academy, Andover, Massachusetts. He received a bachelor’s degree from Harvard College in 1963 and a PhD in mechanical engineering from Harvard University in 1968.

Key influencer takes to the skies

Although accomplished, his unassuming style showed up in two media interviews.

In a 2003 Cincinnati Enquirer news story, Prahl was lauded as an Ohio aviation and aerospace researcher standing on “the cutting edge of the aerospace engineering field” due to his research using layers of air instead of liquid for lubrication in ball bearings.

In 2010, Prahl was selected as a “Key Influencer” in Northeast Ohio and flew a demonstration flight in an F/A-18 Hornet with The Blue Angels in advance of the Cleveland National Air Show at Burke Lakefront Airport.

“…The real thing turned out to be brutal,” he said, admitting he nearly passed out on one 360-degree move. “I really struggled up there, but I’m also really proud that I finished.”