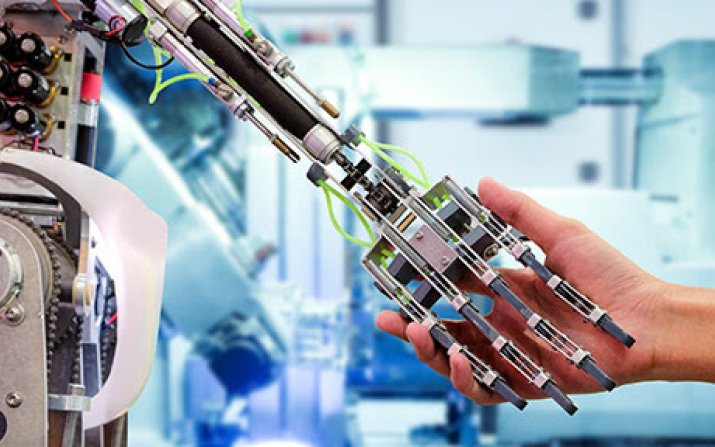 Case Western Reserve University engineers are working with partners at two other universities and an Italian-owned company in Michigan to study, predict and optimize how robots will interact with human co-workers in factories of the future.

While robots have been increasingly integrated into manufacturing since their introduction in the early 1960s, true human-robot workplace collaboration is still in the early stages and is only recently being earnestly studied by academics.

Most researchers anticipate humans taking on the more-nimble decision-making, while robots contribute by lifting heavy tools or putting the right tool at our side when needed.

“You could see this more on an assembly line, where the human is building an engine, screwing the spark plugs into the engine block and the robot is handing him the right tools and parts at the right time,” said Robert Gao, chair of the Department of Mechanical and Aerospace Engineering and the Cady Staley Professor at the Case School of Engineering.

Gao represents Case Western Reserve on a new National Science Foundation-funded project examining various aspects of robot-human collaborations in manufacturing workplaces. He and fellow researchers also wrote about the concept earlier in 2018 for The International Academy for Production Engineering’s manufacturing and technology journal.

“But this also requires the robot ‘knowing’ or interpreting the human’s body language and hand movements, anticipating what he’ll do next,” said Gao. “So, it requires using sensors, computer models, and artificial intelligence that we will develop to help make the robot safely and efficiently collaborating with human operators.”

Gao said such collaboration could make a factory safer and more efficient as robot workers take on the more dangerous jobs. Robots could also help train newer workers by already “knowing” what tools and parts are needed for a task that the recently hired human may still be learning.

Gao and his team at Case Western Reserve will “focus on the prediction part of the robot-human collaboration.” In part, that means figuring out how to teach robot helpers to reliably recognize sometimes random human motions in a variety of different workplace scenarios.

The Intelligent Human-Robot Collaboration for Smart Factory project is supported by a $1.5 million National Robotics Initiative grant from the NSF. The three academic partners—including  the Missouri University of Science and Technology and University of Florida—will share the NSF funding.

The work from the project will be evaluated on the shop floor at COsorizio MAcchine Uensili (COMAU) in Michigan, a Turin, Italy-based manufacturer, and the Institute of Intelligent Industrial Technologies and Systems for Advanced Manufacturing of the National Research Council of Italy.