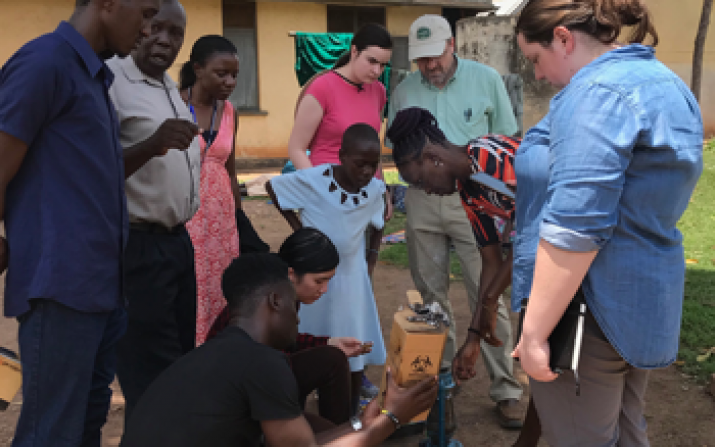 As part of the Global Health Design Collaboration (GHDC) at Case Western Reserve University, Libby Schubert has teamed with other biomedical engineering students to create a waste disposal system for syringes and needles used by remote medical clinics in Uganda. The enthusiastic undergraduates generate ideas in Cleveland, but the goal of the student organization is to ensure their innovations are usable more than 7,300 miles away in eastern Africa. That’s why annual spring break trips to Uganda are so important.

“Meeting the clinicians and healthcare workers was extremely valuable for me,” says Schubert, who traveled to Uganda with seven other students from Case Western Reserve University last March. “I got to observe a vaccination outreach and truly see how the nurses work, which gave me an understanding of how important it is that the solutions we implement can be streamlined into their processes.”

That’s music to the ears of GHDC co-advisors, Andrew Rollins, professor of biomedical engineering, and Janet McGrath, professor and chair of anthropology at Case Western Reserve University. The mission of GHDC is to use the principles of anthropology and engineering design to contextualize and solve unmet clinical needs in the developing world.

“In the realm of global health, decades of technology have been invented in one setting and adapted for use in another. And there have been many failures,” says McGrath. “Sometimes the issues are technical, and sometimes they are related to the broader context of the user environment. So you need to have the expertise of both anthropologists and engineers.”

A Team Approach to Tackling Issues

The Global Health Design Collaboration was formed in 2016 as an offshoot of the student organization Case Western Reserve University MedWish. “Several students and I decided to pilot a design project, which is different than the work done by MedWish, whose primary aim is to test and repair medical equipment donated abroad,” says Rollins. A handful of students worked on a vaccine cooling solution during the spring semester. “The project generated a lot of interest, so the students decided there should be a separate club,” says Rollins.

GHDC, which now has about 40 student members from across disciplines, decided to focus its efforts on Uganda because of a 30-plus year relationship that Case Western Reserve University has with Makerere University in Kampala called the Uganda-CWRU Research Collaboration. Students from both universities work on projects for GHDC.

“The collaboration has helped bring together different perspectives and experiences,” says Robert T. Ssekitoleko, a lecturer and head of the biomedical engineering program at Makerere University. “CWRU students can access a number of technologies and processes for making [those technologies], whereas the Makerere students better understand the context and give insight into culturally-sensitive issues. This combination is very important for developing context-appropriate technologies.” A vaccine carrier designed by the Global Health Design Collaboration.

That dual perspective, along with input from anthropology students, led GHDC students to change direction on the syringe and needle disposal project. In 2018, a group of students on the spring break trip to Uganda – part of Case Western Reserve University’s “Global Health Design in Uganda” course – tested a needle clipper system in the rural Luwero District about 50 miles from the capital city of Kampala. The system trimmed off needles from syringes so the two parts could be treated and disposed of separately.

“The feedback we got from the users was that the needle clipper wasn’t something they were looking for, so we shifted direction to a method of incineration,” says Schubert. The new system GHDC is devising, called Simple Bake, entails putting intact syringes and needles into a metal pan with a replaceable concrete lid, then placing the pan in a burn pit. “The idea is that the plastic melts around the needles and encases them so they are no longer a sharps hazard,” says Schubert. Healthcare workers in the Luwero District in Uganda test out backpacks designed
by the Global Health Design Collaboration that allow them to more easily carry
supplies, such as vaccinations and vitamins, to remote villages.

Part of a Larger Mission

The waste disposal system is just one of several projects undertaken by GHDC. Another group of students is designing backpacks for healthcare workers to more easily carry supplies, such as vaccinations, infant scales, mosquito nets and vitamins, to remote rural areas. Other projects include design of an efficient carrier system to transport vaccines to villages and development of a reusable pediatric pulse oximeter to detect hypoxemia, which is a symptom of pneumonia, a leading cause of mortality for children under five in Uganda.

In addition to GHDC, other student organizations fall under the center’s umbrella. These include the university’s Engineers Without Borders chapter, which is working on a water distribution project in the Dominican Republic, and the Humanitarian Design Corps, which is developing a sustainable water system in Costa Rica and a solar lighting installation in Malawi.

Lynn Rollins says involvement in GHDC and other student organizations in the Center for Engineering Action is meaningful because it more closely resembles how work is done in the “real world” rather than as part of a traditional college class. “Students are part of interdisciplinary teams, working with community partners and addressing real problems,” she says. “These experiences are impactful for young people and often define what they will do later in life.”

Students Can Make a Difference

That’s the case for Amanda Noonan, one of GHDC’s founders, past president of the organization and a 2017 graduate of the Case School of Engineering. “The club appealed to me because I wanted to make a difference in medical technology and saw there were so many simple engineering solutions needed in Uganda and other developing countries,” says Noonan, an electrical engineering major. “I realized that engineering focused on simple, sustainable solutions is far more beneficial for the whole global healthcare and ecosystem.”

While a member of GHDC, Noonan worked primarily on the pediatric pulse oximeter project. Her team researched issues related to oxygen saturation in Uganda, brainstormed several design ideas for a reusable pulse oximeter and began creating a prototype of the selected design. The group landed a $9,000 grant from the Saint-Gobain Corporation Foundation to further the project, which has since resulted in several prototypes.

Noonan says participation in GHDC helped her grow as a leader and learn how to engage people in projects. These skills come in handy at Battelle, where she works as an electrical engineer in research and development in the company’s medical and commercial devices division. “I do a lot of different types of work activities in the R&D space, including research and project definition work similar to things I did with GHDC,” says Noonan.

While the Global Health Design Collaboration strives to design useable products for Ugandan healthcare workers, Andrew Rollins says that backpacks or vaccine carriers aren’t the most important outcome. “We are teaching good design practices and good global citizenship to these young people,” he says. “We hope they solve some problems and help people with their designs. But the biggest impact is on the students themselves, who we hope will have a better capacity to help save the world.”

That outcome – making the world a bit better – would be a dream come true for Schubert, Noonan and the other current and former members of GHDC