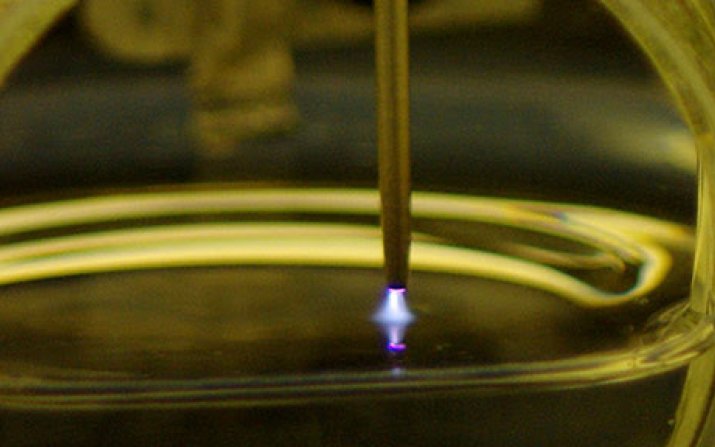 Ammonia, a compound first synthesized about a century ago, has dozens of modern uses and has become essential in making the fertilizer that now sustains most of our global food production.

But while we’ve been producing ammonia at a large scale since the 1930s, it has been accomplished mainly in hulking chemical plants requiring vast amounts of hydrogen gas from fossil fuels—making ammonia among the most energy-intensive among all large-volume chemicals.

A pair of researchers at Case Western Reserve University—one an expert in electro-chemical synthesis, the other in applications of plasmas—are working on fixing that.

Researchers Julie Renner and Mohan Sankaran have come up with a new way to create ammonia from nitrogen and water at low temperature and low pressure. They’ve done it successfully so far in a laboratory without using hydrogen or the solid metal catalyst necessary in traditional processes.

“Our approach—an electrolytic process with a plasma—is completely new,” said Mohan Sankaran, the Goodrich Professor of Engineering Innovation at the Case School of Engineering.

Plasmas, often referred to as the fourth state of matter (apart from solid, liquid or gas), are ionized clouds of gas, consisting of positive ions and free electrons, which give it the unique ability to activate chemical bonds, including the rather challenging nitrogen molecule, at room temperature.

Renner, a Climo Assistant Professor in the chemical and biomolecular engineering department, added that because this new process doesn’t need high pressure or high temperature or hydrogen, it makes it scalable—”the ideal kind of technology for a much smaller plant, one with high potential to be powered by renewable energy.”

The results of their two-year collaboration were published in January in the journal Science Advances.

Virtually all commercial ammonia is made from nitrogen and hydrogen, using an iron catalyst at high temperature and pressure.

German physical chemist Fritz Haber received the Nobel Prize for Chemistry in 1918 for developing this process, which made manufacturing ammonia economically feasible.

But the process became more economically profitable when industrial chemist Carl Bosch (who also won a Nobel Prize in 1931) brought the method into a large-scale system. The process was further propelled by a second innovation: the development of steam methane reforming that made hydrogen more accessible and less expensive.

So, what became known as the Haber-Bosch process became the go-to global method for fixing nitrogen and hydrogen to make ammonia.

But Haber-Bosch was never the only approach to nitrogen fixation, it was just the turn-of-the-century winner.

Renner and Sankaran have resurrected an element from a little-known Norwegian method that predated Haber-Bosch (the Birkeland-Eyde process), which reacted nitrogen and oxygen to produce nitrates, another chemical that can be used in agriculture. That process lost out to Haber-Bosch mostly because it required even more energy in the form of electricity, a limited resource in the early 20th century.

“Our approach is similar to electrolytic synthesis of ammonia, which has gained interest as an alternative to Haber-Bosch because it can be integrated with renewable energy,” Sankaran said. “However, like the Birkeland-Eyde process, we use a plasma, which is energy intensive. Electricity is still a barrier, but less so now, and with the increase in renewables, it may not be a barrier at all in the future.

“And perhaps most significantly, our process does not produce hydrogen gas,” he said. “This has been the major bottleneck of other electrolytic approaches to forming ammonia from water (and nitrogen), the undesirable formation of hydrogen.”

The Renner-Sankaran process also does not use a solid metal catalyst that could be one of the reasons ammonia is obtained instead of hydrogen.

“In our system, the ammonia is formed at the interface of a gas plasma and liquid water surface and forms freely in solution,” Sankaran said.

So far, the “table-top batches” of ammonia produced by the duo have been very small and the energy efficiency is still less than Haber-Bosch. But with continued optimization, their discovery and development of a new process could someday lead to smaller, more localized ammonia plants that use green energy.