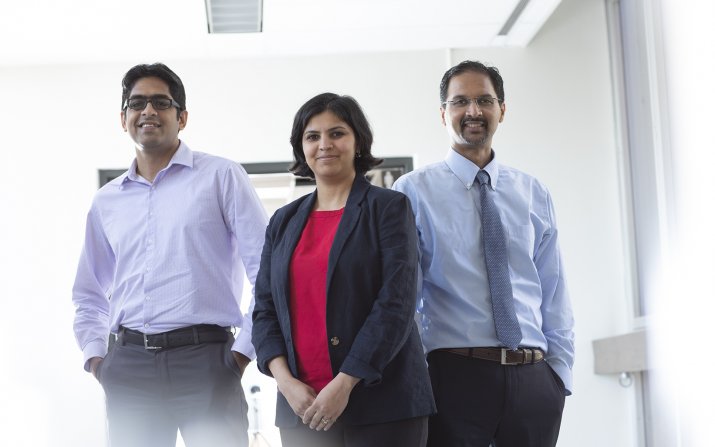 Mankind and machines have come a long way since Archimedes rocked the ancient Greek world by experimenting with pulleys and levers. Our tools are more sophisticated than ever—driven by computing power that has, by some estimates, seen a trillion-fold increase since the advent of the first computers in the mid-1950s.

Add the proliferation of big data and large numbers of imaging studies to the mix, and the environment is ripe for a new generation of smart machines capable of helping human users in unprecedented ways. Biomedical engineers at Case Western Reserve University are looking to pack that high-tech toolkit with a fleet of machine-learning algorithms that can help clinicians make more accurate diagnoses and guide more effective treatment plans.

Madabhushi and his center are pioneering the use of these programs in health care, applying their predictive power to better diagnose and treat a whole host of diseases.

The researchers build their algorithms based on data from routinely acquired medical images, typically MRI or CT scans or digitized tissue slides, which they say contain a treasure trove of information invisible to the human eye.

Some conditions are notoriously tricky to identify based on images alone. For instance, 97 percent of lung nodules are benign, Madabhushi says, but it’s difficult for radiologists to tell harmless nodules from tumors based on the visual information from a scan.

“So you err on the side of caution,” he says. “You order additional tests like follow-up CT scans and biopsies —it’s expensive and invasive.” By identifying quantitative patterns, he says, these decision tools could help radiologists do a better job differentiating these very similar-looking pathologies.

Similarly, radiation necrosis in the brain—a benign condition that results from radiation treatment—is nearly impossible to visually distinguish from a recurrent brain tumor on routine imaging. Pallavi Tiwari, CCIPD member and assistant professor of biomedical engineering, has developed an algorithm that outperformed expert clinicians in telling the difference. On their own, the two neuroradiologists in the original study accurately diagnosed cancer about 50 percent of the time. But when they teamed up with Tiwari’s algorithm, they spotted 95 percent of cancer recurrences.

“If you can know upfront what’s going to work best for the patient, at every step, you are personalizing the treatment plan.That’s where these programs are going to have the biggest impact.”

While these diagnostic programs are sometimes framed as competitors for their human counterparts, Tiwari’s study highlights the power of the human-machine combo. “You can’t teach computers everything,” she says. “But if we can bring human experience together with what computers can do, it’s a powerful combination.”

In collaboration with clinicians at Cleveland Clinic this year, Tiwari received a three-year $200,000 grant from the Dana Foundation. She also received a $577,000 Department of Defense grant to continue testing and validating the algorithm’s performance on multi-institutional studies.

The center’s growing army of algorithms is not limited to cancer. Researchers published a study this year in PLOS ONE documenting an algorithm’s 97-percent accuracy in predicting pending heart failure, and they’re applying the approach to diagnosing Alzheimer’s earlier and predicting the progression of kidney disease.

The right treatment, right away

The ability to predict a disease’s aggression level is just as critical as making a quick, accurate diagnosis in the first place, Madabhushi says.

This year, the center secured grants of more than $6 million from the National Cancer Institute and almost $2 million from the Department of Defense to support developing algorithms to predict the aggressiveness of lung, prostate and brain, as well as head and neck cancers. The center is collaborating with Cleveland Clinic, University Hospitals, the Louis Stokes VA Medical Center, and also industry partner Inspirata Inc.

And, with funding from the U.S.–India Science and Technology Endowment Fund, the center is partnering with the Tata Memorial Centre in Mumbai to develop a predictive algorithm based on digitized tissue slides to help identify aggression in breast cancer to determine which patients will benefit from chemotherapy and which will not.

By predicting success based on solid, quantitative information, doctors can put patients on the right treatment track from the start, according to Satish Viswanath, center member and assistant professor of biomedical engineering. Viswanath specializes in applying predictive image analysis approaches to gastrointestinal diseases like colorectal cancers and inflammatory bowel conditions like Crohn’s disease.

“For instance, in Crohn’s, therapies right now follow a stepped approach,” he says, as doctors gradually ramp up the level of intervention as the disease progresses. “In aggressive disease presentations, you have a disease that’s progressing while the more conservative treatment isn’t helping. If you can tell who will benefit from more aggressive therapy up front, you can skip unnecessary and unhelpful treatments and improve the patient’s outcome.”

The researchers’ ultimate goal is to create a more precise approach to health care. For many diseases, lack of predictive guidance forces doctors to take a “kitchen sink” approach to treatment, Madabhushi says, in which the same treatment plan is applied across the board, leaving clinicians to react if it’s not effective. Precision medicine can be more proactive, personalized and informed.

“If you can know upfront what’s going to work best for the patient, at every step, you are personalizing the treatment plan,” Tiwari says. “That’s where these programs are going to have the biggest impact.”

Learn more about the center’s work at engineering.case.edu/ccipd.