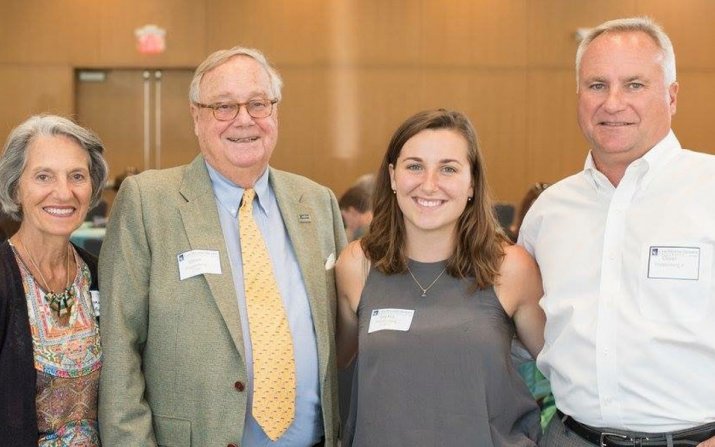 When Oliver Poppenberg Sr. graduated from Case Institute of Technology in 1959, he felt confident his new credentials gave him a leg up on the competition. Now, 62 years later, his granddaughter, Sophia Poppenberg, feels the same way regarding her own. This weekend, Sophia will graduate from Poppenberg Sr.’s alma mater with a bachelor’s in chemical engineering, joining her grandfather as a member of a Legacy Family—one with two or more graduates of the university.

For Poppenberg Sr., his granddaughter’s milestone is a point of personal pride—and one long in the making. After his own graduation, he put his degree in management science to work in what he described as “the exploding field of computerization in manufacturing and distribution,” enlisting in the Naval Reserve before enjoying a career as an industrial engineer at companies such as Republic Steel and Conair Group.

He became an active alumnus as well, initially serving as treasurer of the Case Alumni Club in his hometown of Pittsburgh. When his alma mater’s 1967 federation with Western Reserve College prompted a “major schism” among the alumni base, Poppenberg Sr. felt compelled to help mend the divide by assisting the newly formed Case Western Reserve University with recruitment.

He played a role crafting a program to recruit alumni to engage with prospective students and encourage them to choose CWRU, putting in place an alumni recruitment model that is still in use at the university today. He also went on to serve in leadership roles for the newly formed Undergraduate Alumni Association and as president of the Alumni Council and the Pittsburgh chapter of the Case Alumni Association. This involvement earned him the Newton D. Baker Award for Outstanding Alumni from his fraternity, Sigma Alpha Epsilon (SAE), as well as the Meritorious Award from the Case Alumni Association.

Poppenberg Sr. also wanted his own family to enjoy the life-changing experiences he’d had at Case. So when it came time for his seven granddaughters and his grandson to apply to college, he was a passionate advocate for his alma mater.

“Growing up [in Pittsburgh], I always heard my grandpa talk about Case,” said Sophia, the youngest of three sisters in her family, recalling her grandfather’s frequent stories.

Though Sophia’s older sisters enjoyed hearing these memories and did apply to CWRU, they both opted to attend colleges in locations that offered warmer weather. But having visited Cleveland multiple times to perform at the Rock & Roll Hall of Fame through a middle school “rock band” program, Sophia found herself more intrigued.

It wasn’t until her formal tour that she first stepped foot on Case Western Reserve’s campus, a visit she chose not to tell her grandfather about in the event she’d choose not to apply. But after attending a meet and greet event with the faculty in the chemical engineering department, she knew she’d found her home.

“We had my grandparents over for dinner and wore ‘Case Legacy’ T-shirts as a surprise,” said Sophia, reflecting on how she shared her news. “I remember [my grandfather] was super excited.”

Since enrolling at CWRU in 2017, Sophia has led an active schedule. Whereas her grandfather was a varsity member of the Rough Riders swim team and an officer of SAE, Sophia played club lacrosse for three years, has been an active member of the Phi Mu sorority, and studied abroad in Manchester, England, for several months in the spring of 2020 before being sent home due to the COVID-19 pandemic.

Reflecting and looking ahead

For both Poppenbergs, the one-on-one mentorship they experienced from faculty and the lifelong friendships they made stand out as favorite aspects of their time here. And for Sophia, regular visits from her grandfather made her experience even more special.

After graduation, Sophia will head to Cincinnati, Ohio, to work at Procter & Gamble as a research development engineer. Like her grandfather, she sees herself staying involved as an alumna, attending homecoming and perhaps offering career guidance to future students.

When asked what advice he has for his granddaughter upon her graduation, Poppenberg Sr. shared: “Sophie, continue to be a strong, optimistic, creative woman and independent thinker who knows what she wants and goes for it. Continue to help others as you always have. And never lose your fabulous sense of humor.”

Sophia Poppenberg will join her classmates in commencement ceremonies Sunday, May 30. For details on how to stream the events, visit the commencement website.