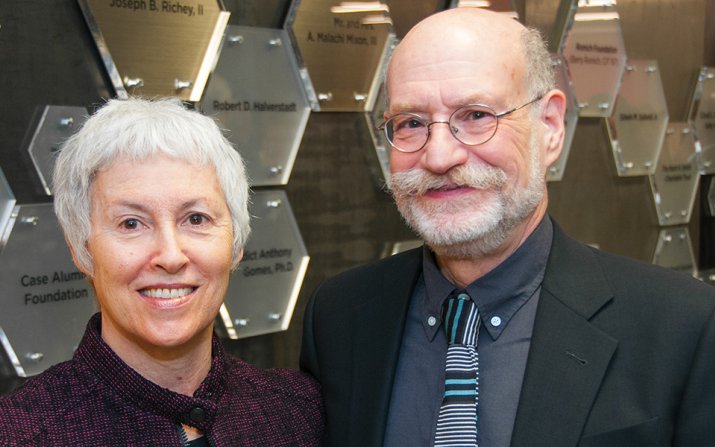 As an undergraduate engineering student, Larry Sears had to go to his Cleveland Heights basement when he wanted to tinker.

Today, thanks in part to his leadership and generosity, students across the campus can create everything from jewelry to medical diagnostic devices—whether as a hobby or the foundation of a future startup.

Yet the Larry Sears and Sally Zlotnick Sears think[box] is hardly the only example of ways that the couple contributes to Case Western Reserve and the larger community. In recognition of their exceptional philanthropic service to the university, humanity and the world, the two will receive the 2018 President’s Award for Visionary Achievement during commencement exercises Sunday, May 20.

“Larry and Sally have had a tremendous impact on our campus through their extraordinary support of projects like the Larry Sears and Sally Zlotnick Sears think[box] and Sears Undergraduate Design Lab,” President Barbara R. Snyder said, “and also their direct, personal engagement with the university community. The opportunities they create for students extend their influence across generations, and the world.”

After earning his bachelor’s degree in electrical engineering in 1969, Larry Sears founded the electronics company Hexagram three years later. His wife, Sally, earned her undergraduate degree in 1972 from what was then the Flora Stone Mather College for Women and went on to earn a master’s degree in library science from the university in 1974.

In the years that followed, Larry developed a remote automatic meter-reading device that was adopted by utilities across the country. After selling the company in 2006, the couple made a $6 million commitment to create the Sears Undergraduate Design Lab in electrical engineering. A few years later, Larry, also an adjunct faculty member in electrical engineering, began working with a small group looking at ways to deploy a donor’s commitment to support advanced manufacturing in engineering. He quickly saw broader possibilities for the pledge, and before long the seeds of what would become think[box] had taken root. First launched as a pilot basement space of less than 5,000 square feet, the Richey-Mixon building now welcomes 5,000 visits per month, and two-thirds of undergraduates here cite the space as a determining factor in their choice to enroll.

The equipment at Sears think[box]—from 3-D printers and laser cutters to oscilloscopes and band saws—has enabled student entrepreneurs to build and refine prototypes, which, in turn, provides them opportunities to secure needed investment through competitions nationwide and exhibits at events like the International Consumer Electronics Show. Since think[box] first opened as a pilot in 2012, student-led companies have secured more than $10.2 million.

Perhaps even more impressive, these companies feature such products as a sideline concussion detector, self-powering wireless sensor systems, and a device that can detect the presence of malaria in seconds. Not only do these efforts offer the promise of creating jobs, they also can change—even save—lives.

Larry Sears is a member of the university’s Board of Trustees, while Sally is a member of the Cleveland Museum of Natural History’s board. In 2016, the natural history museum celebrated the opening of the Larry Sears and Sally Zlotnick Sears Garden, featuring the iconic Mammoth and Mastodon sculptures created by world-renowned Cleveland artist Viktor Schreckengost.