Innovation hub think[box] gets more support and a new name 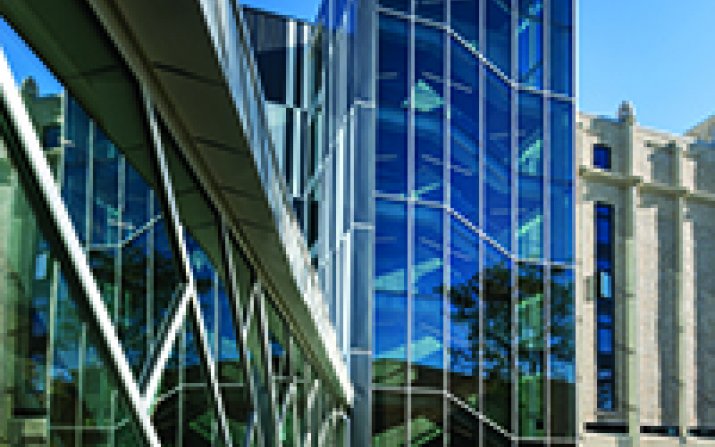 The university’s innovation hub that opened earlier this month already has a new name: Sears think[box].

Or, more formally: the Larry Sears and Sally Zlotnick Sears think[box] at the Richey Mixon Building.

As part of events involved in the university’s Innovation Summit, President Barbara R. Snyder announced Tuesday evening that the couple’s giving to think[box] now totals $10 million; in recognition of their generosity, she added, the innovation center had been named in their honor.

With the newest commitment, Larry, a 1969 alumnus of the engineering school, and Sally, a 1972 graduate of what was then the Flora Stone Mather College for Women (as well as a 1974 graduate of the School of Library Science) have become the largest individual donors to the Case School of Engineering in its history.

“Their visionary leadership [and] their longstanding engagement is truly extraordinary,” President Snyder said. “They have made such a difference.”

Larry Sears, a graduate of Shaker Heights High School, came to the university as a young man who loved to tinker. Even as an undergraduate, he “cobbled together” the space and equipment need to create a machine shop in the basement where he lived in Cleveland Heights.

“I owe whatever success I have had to [my] extracurriculars,” Larry Sears said Tuesday evening, citing that shop as well as opportunities to collaborate with professors and others on real-world projects. “It was the work I did outside the classroom that consolidated the theoretical [knowledge learned in class].”

Three years after he earned his degree, Larry founded Hexagram, an electronics company that went on to create a remote automatic meter-reading device for gas, water and electric companies. The technology proved so successful that by the time he sold the company in 2006, Hexagram served more than six dozen utilities and had a contract with Pacific Gas & Electric for another 4.1 million meters.

The month after the sale, Larry and Sally made their first major philanthropic commitment to engineering, a nearly $6 million gift for the Sears Undergraduate Design Lab. Larry Sears also serves as an adjunct professor in the Case School of Engineering and has been a member of the university Board of Trustees since 2008.

The couple first committed $5 million to think[box] in 2012 and helped launch major fundraising. Their newest contribution brings the total for think[box] to $10 million.

The pilot space for the Sears think[box] opened in 2012 and drew more than 100,000 visits over the ensuing three years. It also contributed to the launch of 20 startups that in turn drew $2.5 million in funding.

Jeffrey Duerk, dean of the Case School of Engineering, emphasized the “innovation ecosystem” created within a building that includes floors for developing ideas, prototyping products, securing advice and guidance regarding the financial, legal and other elements of launching a start-up, and then incubating that new company. Faculty, students, staff, alumni and members of the community all are welcome, he added.

“It’s really uniquely available to our campus and to our neighbors,” Duerk said.