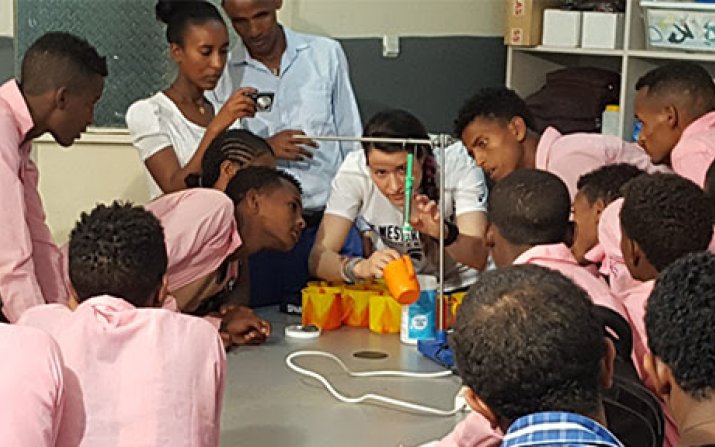 Ethiopia has an abundance of raw materials, but does not yet have the engineering infrastructure to turn that material into a thriving economy and jobs.

But a new initiative funded by a longtime Case Western Reserve University benefactor—and in which the Case School of Engineering is taking a lead role—aims to help grow that infrastructure to encourage broad and lasting economic development in that East African nation.

More specifically, the Gelfand Global STEMPower Initiative will have Case Western Reserve graduate fellows collaborate with constituencies in Ethiopia to develop innovative engineering curricula for high school students there—centered on the idea that engineering is a means of adding value.

The initiative is funded by a commitment from philanthropist Mark Gelfand, who previously endowed Case Western Reserve’s Leonard Gelfand STEM Center in honor of his uncle, who attended the former Case Institute of Technology and graduated as an electrical engineer.

Throughout Ethiopia, Gelfand has built a network of 30 schools and STEM centers that provide top-quality education for thousands of students each year. The initiative will partner with this network, to have a widespread impact.

The endeavor is led by Daniel Lacks, chair of the Department of Chemical and Biomolecular Engineering; Daniel Ducoff, vice president for engineering and global development; and Blaire Volbers, a 2012 alumna and Shaker Heights High School science teacher.

Volbers will return to Case Western Reserve this fall as the inaugural Gelfand Global Fellow and will continue work on the initiative as part of her graduate studies in chemical engineering.

The initiative focuses on chemical engineering, which is the field where lower-value raw materials are transformed to higher-value products.

“A lot of the motivation for the program is to encourage Ethiopia’s young people to industrialize their raw, natural resources in ways that stimulate the economy there,” Volbers said in a Shaker Heights Schools feature about her work in the program. “The idea to help the country through science education is really exciting.”

The team members recently returned from Ethiopia, where they began building partnerships for the program. Volbers also piloted initial curricular elements with students at STEM high schools in Bahir Dar and Gondar. The hands-on activity introduced the idea of adding value and other chemical engineering concepts in the context of making soap from vegetable oil.

While the students had done chemistry labs before, they said this experience was different. “Making an end-product that they use on a daily basis was really exciting for them,” Volbers said.

Gelfand chose Case Western Reserve to be the United States university partner for this project.

“He wanted to figure out where he could have the most impact in the world,” Ducoff said. “Focusing on the children allows them to transform themselves, their families and their communities. They’re very entrepreneurial. They’re not asking what can you do for us, but what can we do together?”