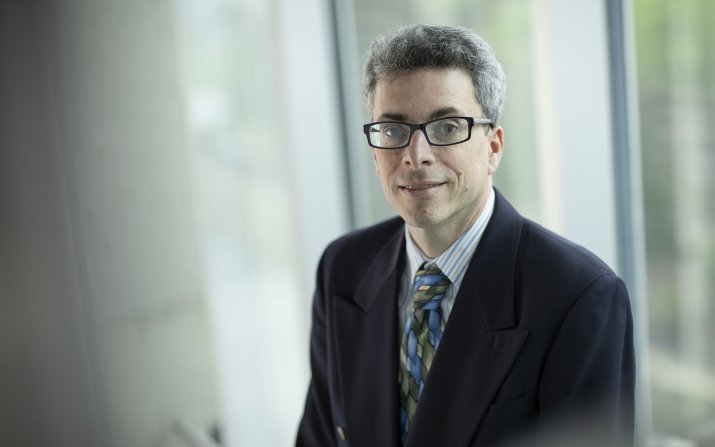 Harold Connamacher has been called a “master teacher” by one colleague, a professor with “lifelong impact” by another, and simply “the most approachable professor I ever had” by an appreciative student.

But Connamacher, a professor of electrical engineering and computer science at the Case School of Engineering, who is being honored with the 2019 Carl F. Wittke Award for Excellence in Undergraduate Teaching, said he thinks of himself more like a coach for academics.

“You can’t teach an athlete to do something unless you get buy-in from them, and it’s the same with students: I have to show them why it’s worthwhile and applicable,” he said.

Connamacher will be recognized with other award winners during commencement ceremonies May 19.

He had been nominated for the Wittke seven times in his eight years at Case Western Reserve, a distinction he values as much as winning. “I guess you know if you’re being nominated, you’re having the right impact on your students,” he said. “And there are members of the faculty every year who are just as deserving, so I’m very grateful.”

Some of those colleagues seem to agree that Connamacher is more than merely effective. He’s inspirational.

“I consider Harold to be our ‘master teacher,’ someone I look up to in striving to improve my own teaching,” said Michael Rabinovich, a professor of electrical engineering and computer science. “There are usually a bunch of students crowded around his office table, sitting on the floor and sometimes spilling into the hall.”

Mehmet Koyuturk, the Jennings Professor of Computing Sciences, said Connamacher’s impact “is lifelong in that it establishes strong fundamentals and it gets the students curious and excited about the material.”

Computer science department Co-Chair Jing Li described Connamacher as “one of the greatest assets of our department,” whose care for students goes far beyond the classroom.

One of those former students, Stephanie Hippo (CWR ’15) said Connamacher’s courses were “famously a lot of work, but always worth it,” and that he managed to learn everyone’s name—even in large lecture courses. “Dr. Connamacher is the kind of professor that makes me want to give back and pay it forward to help keep improving the department,” she said.

Connamacher said he sees the teacher-student relationship as a partnership. “I try to view the students as equals in the learning process. We’re in this together,” he said, noting that undergraduates often try out the newest version of a programming language before he does and share their insights. “If you close yourself off to that, to learning from your students, you’re not really going to be an effective teacher.”

Created in 1964, the Wittke Award is named for Carl Frederick Wittke, who, from 1948 to 1963, was professor of history, chair of the Department of History and vice president of Western Reserve University. Faculty members who teach undergraduates are eligible. Undergraduates nominate candidates; a committee of students interviews nominated faculty members and recommends winners. Two faculty members receive the award each year.