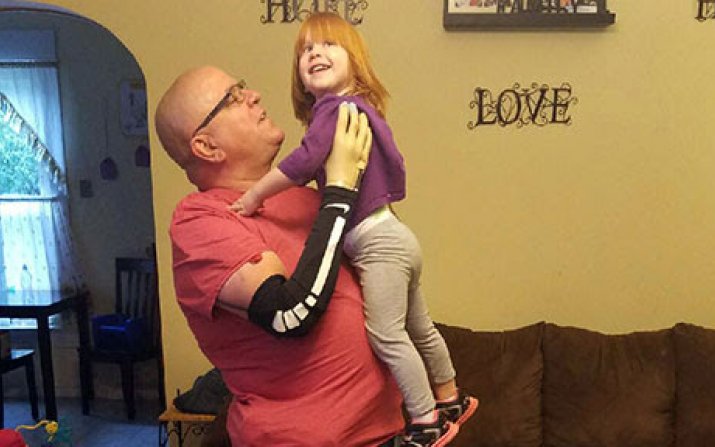 In the first known study of how amputees use advanced sensory-enabled prostheses outside the lab, subjects used a mechanical hand more regularly and for longer periods of time compared to traditional prostheses—and also reported a greater sense of psychosocial well-being.

In fact, the study asserts that sensory feedback—achieved by direct interfaces attached to the nerves —fundamentally changed how the study participants used their mechanical attachment, “transforming it from a sporadically used tool into a readily and frequently used ‘hand.’”

The study, published in June in the journal Scientific Reports, was led by a pair of researchers from Case Western Reserve University, who collaborated with scientists from Brown University and partners at U.S. Veterans Affairs sites in Cleveland and Providence, Rhode Island.

In video interviews with Case Western Reserve, the two subjects who took part in the study talk about the impact that using the sensory-enable hand made in their home lives, from being able to pick up a grandchild to pick flowers, button a shirt or slice tomatoes.

Two aspects of the research make it significant: That is was conducted at home without restrictions on how the prosthesis was used; and the significant positive impact of sensory feedback—both functional and psychological—that resulted from extended use of the prosthesis, said lead researcher Dustin Tyler, the Kent H. Smith Professor of Biomedical Engineering at Case Western Reserve.

Researchers have for nearly a decade demonstrated that restored sensation can aid in object identification and manipulation tasks, but that those results were produced in laboratory settings, Tyler said.

“When they’re in the lab, many subjects (in previous studies) have described their prosthesis as nothing more than a tool attached to the end of their residual arm,” said Tyler, associate director of the Advanced Platform Technology Center at the Louis Stokes Cleveland VA Medical Center.

“Once home, they’d often end up putting a traditional prosthesis on the shelf. We found the opposite to be true when they had a sense of touch—they didn’t want to stop using it.”

The subjects in this study used the sensory-enabled prosthesis far longer than the same prosthesis without sensation. One said that giving back the sensory device after the study concluded was “like losing my hand all over again.”

In addition to wearing the artificial hand for more time and for more daily tasks when it was sensory enabled, the participants had greater confidence in using the hand to do tasks and to socially interact with loved ones, said Emily Graczyk, a post-doctoral researcher at Case Western Reserve University and lead writer on the new study.

These psychological and emotional impacts of sensation could be critical for improving amputees’ quality of life, Graczyk said.

Prosthetic rehabilitation, and virtually all research surrounding it, has so far focused mostly on restoring physical function—not the psychosocial aspects of using a prosthesis, Tyler and Graczyk wrote in their paper.

Tyler said his research team is next looking at implanting devices to route the neural connections through Bluetooth technology to allow the amputee to “feel” the new hand through wireless connections between themselves and the device.

“When you add sensory feedback technology to something like a prosthetic hand, you add the most important thing that connects us together as humans—touch,” Tyler said. “That’s a huge difference.”