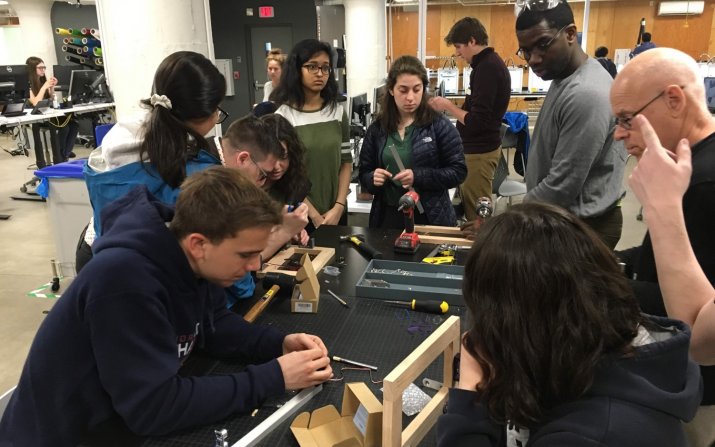 First-year students at Case Western Reserve University are about to get their hands dirty early and often as part of a new signature, introductory course at the Case School of Engineering.

The Roger E. Susi First Year Undergraduate Engineering Experience will take incoming students out of the lecture hall and into a lab environment in their first two semesters. The new course will begin for some students in the fall of 2020 and roll out over the course of the next year for all first-year engineering students.

The program will also eventually have its own home in a 5,000-square-foot lab planned for the Bingham Building.

Under the new curriculum, first-year engineering students will spend some of their time in their first two semesters doing things from the seemingly simple—balancing a ball on a beam—to the complex, like building electric motors or designing better water filters. The instruction will be primarily in the form of real-world, hands-on projects which put engineering fundamentals into action.

“The idea is to get students, and eventually workers and engineer leaders, who will know how to do things, to design and build things—not just memorize and regurgitate information,” said Kurt Rhoads, faculty director for the new program and an assistant professor in the Department of Civil Engineering’s Division of Engineering Leadership and Professional Practice. Rhoads has been leading a pilot program this year that will form the backbone of the new course.

“For a long time, engineering schools taught only with a professor at the chalkboard—but that’s not what engineers do,” he said. “Engineers solve problems for people.”

Rhoads’ pilot program is able to grow into a full introductory course for some 500 engineering first-year students, thanks to a $2 million gift from Susi, a 1977 engineering graduate, who said he has twice started companies in his garage that have gone public.

The lab project is also supported by $1 million from a matching program developed several years ago through the collaborative efforts of the Office of the Provost, University Relations and Development and the Division of Finance.

Susi is board chairman and chief technology officer of Iradimed, a Florida-based company he founded that has become a world leader in developing innovative magnetic resonance imaging (MRI)-compatible medical devices. That company is Susi’s second startup after Invivo Research Inc., a medical device company that pioneered MRI-safe patient monitoring.

He said he envisions the lab as a dynamic place where students can see and understand the concrete realities behind the academic theories they learn in the classroom—a place where they can safely build things up and tear them apart.

“If we’re going to make this lab, let’s make sure they get their fingernails dirty,” he said. “That’s going to help them as students and in the world after graduation.”

Susi said he has been an advocate for immersive education long before he even knew what to call it.

“I’ve been the quintessential, hands-on tinkerer since I was a 10-year-old building shortwave radios in my family’s basement, so it comes naturally to me,” he said. “But even as a student, I was amazed at how many friends did wonderfully on tests, but could not connect such ‘textbook’ knowledge to how things worked in real life. Later, I saw the same thing in the workplace and especially when I started my own company and began to hire engineers. I too often found these engineers lacking an innate technical connection to their design thinking.

“All of this has convinced me,” Susi continued,  “that there is a need for all engineering students to get an exposure to how things really work.” 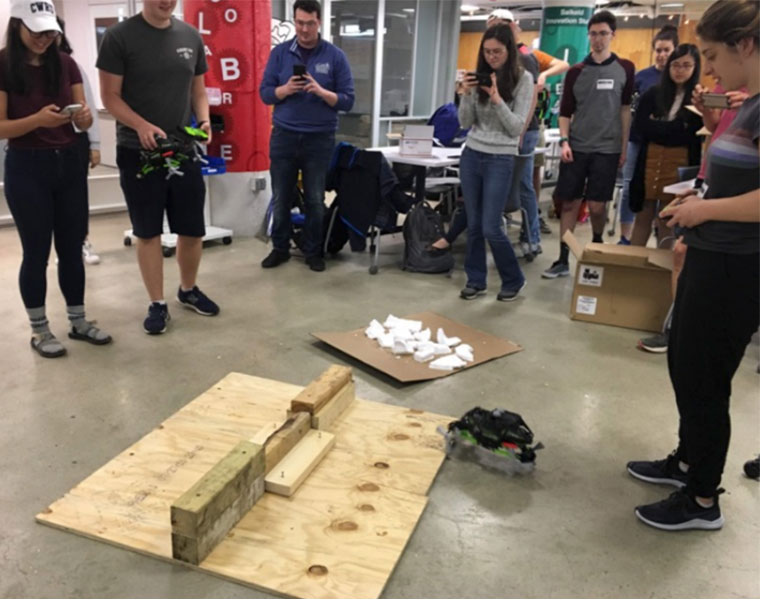 Students in this year’s pilot program work on a project with a robot vehicle.

The pilot program now being taught by Rhoads to about 20 engineering students was funded by an Association of American Universities (AAU) grant awarded in February to enhance undergraduate education in science, technology, engineering and mathematics (STEM).

Rhoads said the first-semester course consists of hands-on individual and team projects, combined with data analysis and programming instruction. Each project is also designed with a co-instructor with expertise from a different engineering field. In the end, students will build and test their own project, such as a piezoelectric crystal or a water sensor.

In the second semester, the course will broaden even further as the students work with a community partner and Case Western Reserve’s innovation center, the Larry Sears and Sally Zlotnick Sears think[box], on real-world engineering problems.

Students will also be taught how to communicate effectively with a client, make presentations and generate project reports.