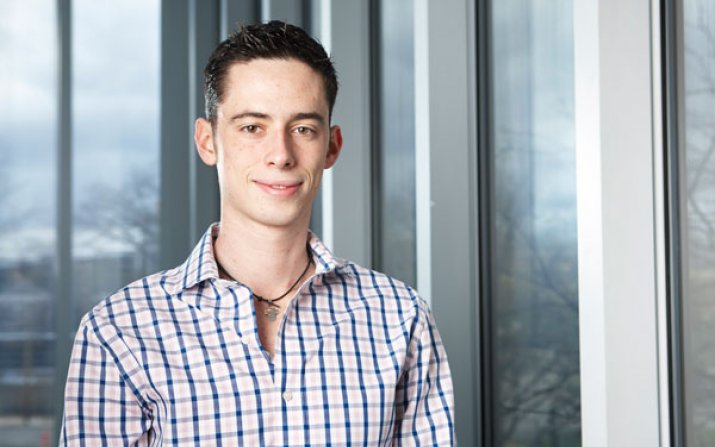 He’s been recognized as a rising energy innovator in Forbes “30 under 30” and honored at the White House as an emerging global entrepreneur by President Barack Obama.

Next up for Case Western Reserve University graduate student Felipe Gomez del Campo: He’ll be one of four innovators nationally to participate in a new two-year entrepreneurship program at the U.S. Department of Energy’s (DOE) Argonne National Laboratory in Lemont, Illinois.

All four were selected to embed at Argonne for two years to access the lab’s scientific expertise, world-class facilities and mentorship to develop their innovative technologies.

“For an entrepreneur/technologist, this is huge because the future is never certain,” Gomez del Campo said. “You never know when you’re going to run out of money, if you’ll be able to find more, what technological problems you’re going to run into, etc. Joining the first cohort of CRI means that I don’t have to worry as much about fundraising, and I can fully commit to developing the technology and get it to market.”

CRI is part of a new initiative to accelerate the development of sustainable and energy-efficient technologies and drive manufacturing growth by helping startups and innovators reduce development costs and risks. A panel of judges selected the inaugural cohort of five Chain Reactions innovators from more than 100 applications.

Applicants for CRI came from 22 states. About half were with startups; the rest were students, professors, postdocs or members of industry. The four recipients represent Colorado, Indiana, North Dakota and Ohio.

The other three technologies in the first CRI cohort: a novel radioisotope battery made from nuclear waste; membrane-free electrochemical devices; and carbon material synthesis through sustainable bio-manufacturing methods.

Argonne National Laboratory, with a staff of 1,600 scientists and engineers, is the largest federally funded research and development facility in the Midwest. The CRI program provides the selected entrepreneurs dedicated laboratory and office space, support securing additional project funds, research and development assistance and access to a broad innovation ecosystem.

Gomez del Campo was honored as an emerging global entrepreneur by Obama at the White House in 2015 and was selected by the State Department to represent the United States at the 2016 Global Entrepreneurship Summit.

He earned a spot on the Forbes “30 under 30” list for 2016 in the energy category, the “Who’s Who to Watch in Technology” by Crain’s Cleveland Business and as one of Mexico’s six extraordinary young people by GQ Mexico. He also has been named a member of the American Institute of Aeronautics and Aerospace, the American Society of Mechanical Engineers and the Society of Hispanic Professional Engineers.

FGC Plasma Solutions is working on a fuel injector that incorporates plasma to better control combustion in jet engines and gas turbines. By reducing fuel consumption during idling, fuel savings of between 1 percent and 5 percent per flight are possible. The technology will also enable benefits from lower emissions, increased fuel flexibility and improved reliability.

Gomez del Campo said he will likely start the CRI program in late January or early February. CRI is a one-year commitment that can be extended to two years.

“Even though I will be at Argonne, I will still be working on my thesis—which is on my technology incidentally—and taking classes online to finish my master’s,” he said. “Although it means a lot of changes for me and I will miss CWRU a lot, it is a fantastic opportunity and I am very excited.”