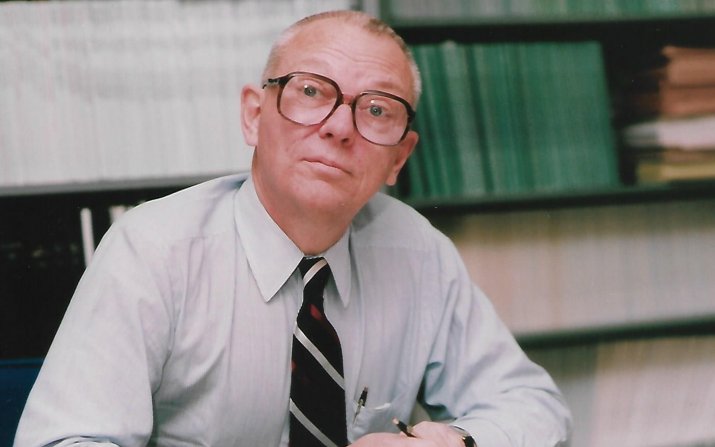 Former Case Institute of Technology Professor and Division Head Lucien A. Schmit, Jr. died at his home in Lynnwood, Wash., on March 16, 2018, at the age of 89. The cause of death was heart failure and pneumonia, after suffering from bladder cancer for several years.

Schmit was widely recognized as the father of modern structural optimization (also known as structural synthesis). In 1960 he published a landmark paper introducing the idea of combining finite element structural analysis with nonlinear programming techniques. This basic idea led to the creation of a powerful new class of structural design optimization methods that have found use in major commercial computer programs used extensively in engineering practice. Many of the key ideas that advanced the state-of-the-art in structural synthesis later provided useful guidelines for the development of Multidisciplinary Design Optimization (MDO) methods.

Before entering the academic world, Schmit was a structures engineer at the Grumman Aircraft Engineering Company and later a research engineer at the MIT Aeroelastic and Structures Research Laboratory. In 1958 he joined the faculty of the Case School of Engineering’s predecessor institution, the Case Institute of Technology, as an assistant professor, rising to full professor by 1964 and, in 1969, he was appointed the Wilbert J. Austin Distinguished Professor of Engineering. From 1966 to 1970 he was Head of Case Institute of Technology’s Division of Solid Mechanics, Structures and Mechanical Design.

In 1970 Lucien Schmit was appointed professor of engineering and applied science at the University of California, Los Angeles, where his teaching and research focused on creating efficient methods for large scale, system-level structural optimization. He remained at UCLA until 1998.

From 1977 to 1984, Schmit was a member of the United States Air Force Scientific Advisory Board. The Air Force later awarded him a medal for Meritorious Civilian Service. He was elected a fellow of American Institute of Aeronautics and Astronautics, the American Society of Civil Engineers and the American Academy of Mechanics. In 1985 Professor Schmit was elected to the National Academy of Engineering.

Schmit earned B.S. and M.S. degrees from the Massachusetts Institute of Technology in 1949 and 1950. While his more than one hundred publications dealt primarily with modern methods for the analysis and synthesis of structural systems, he also made significant contributions to other areas including: thermal stress analysis, finite element analysis, optimization of fiber composite structures, and multidisciplinary design optimization.

Schmit was married to his wife Eleanor for more than 63 years until her death in March of 2015. He is survived by his son Lucien A. Schmit III of Lopez Island, Washington.