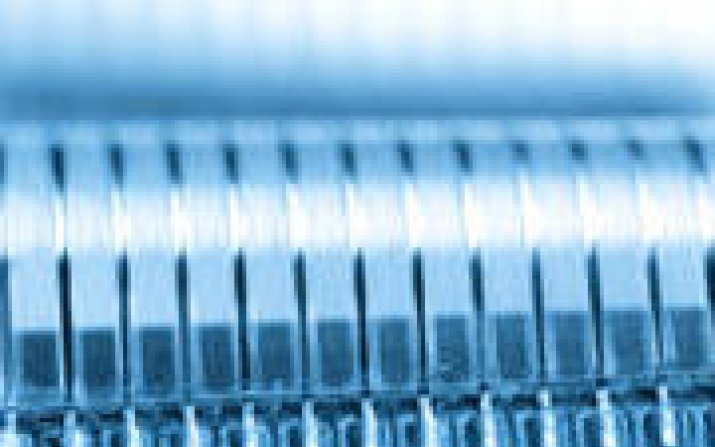 Scientists have taken a large step toward making a fiber-like energy storage device that can be woven into clothing and power wearable medical monitors, communications equipment or other small electronics.

The device is a supercapacitor—a cousin to the battery. This one packs an interconnected network of graphene and carbon nanotubes so tightly that it stores energy comparable to some thin-film lithium batteries—an area where batteries have traditionally held a large advantage.

The device also maintains the advantage of charging and releasing energy much faster than a battery. The fiber-structured hybrid materials offer huge accessible surface areas and are highly conductive.

The researchers have developed a way to continuously produce the flexible fiber, enabling them to scale up production for a variety of uses. To date, they’ve made 50-meter long fibers, and see no limits on length.

They envision the fiber supercapacitor could be woven into clothing to power medical devices for people at home, or communications devices for soldiers in the field. Or, they say, the fiber could be a space-saving power source and serve as “energy-carrying wires” in medical implants.

Dai, a professor of macromolecular science and engineering at Case Western Reserve and a co-author of the paper, explained that most supercapacitors have high power density but low energy density, which means they can charge quickly and give a boost of power, but don’t last long. Conversely, batteries have high energy density and low power density, which means they can last a long time, but don’t deliver a large amount of energy quickly.

Microelectronics to electric vehicles can benefit from energy storage devices that offer high power and high energy density. That’s why researchers are working to develop a device that offers both.

By mass, supercapacitors might have comparable energy storage, or energy density, to batteries. But because they require large amounts of accessible surface area to store energy, they have always lagged badly in energy density by volume.

Their approach
To improve the energy density by volume, the researchers designed a hybrid fiber.
A solution containing acid-oxidized single-wall nanotubes, graphene oxide and ethylenediamine, which promotes synthesis and dopes graphene with nitrogen, is pumped through a flexible narrow reinforced tube called a capillary column and heated in an oven for six hours.

Sheets of graphene, one to a few atoms thick, and aligned, single-walled carbon nanotubes self-assemble into an interconnected porous network that run the length of the fiber.

The arrangement provides huge amounts of accessible surface area—396 square meters per gram of hybrid fiber—for the transport and storage of charges.

But the materials are tightly packed in the capillary column and remain so as they’re pumped out, resulting in the high volumetric energy density.

The findings
The researchers have made fibers as long as 50 meters and found they remain flexible with high capacity of 300 Farad per cubic centimeter.

In testing, they found that three pairs of fibers arranged in series tripled the voltage while keeping the charging/discharging time the same.

Three pairs of fibers in parallel tripled the output current and tripled the charging/discharging time, compared to a single fiber operated at the same current density.

When they integrate multiple pairs of fibers between two electrodes, the ability to store electricity, called capacitance, increased linearly according to the number of fibers used.

Using a polyvinyl alcohol /phosphoric acid gel as an electrolyte, a solid-state micro-supercapacitor made from a pair of fibers offered a volumetric density of 6.3 microwatt hours per cubic millimeter, which is comparable to that of a 4-volt-500-microampere-hour thin film lithium battery.

“We have tested the fiber device for 10,000 charge/discharge cycles, and the device retains about 93 percent of its original performance,” Yu said, “ while conventional rechargeable batteries have a lifetime of less than 1,000 cycles.”

The team also tested the device for flexible energy storage. The device was subjected to constant mechanical stress and its performance was evaluated. “The fiber supercapacitor continues to work without performance loss, even after bending hundreds of times,” Yu said.

“Because they remain flexible and structurally consistent over their length, the fibers can also be woven into a crossing pattern into clothing for wearable devices in smart textiles.” Chen said.

Such clothing could power biomedical monitoring devices a patient wears at home, providing information to a doctor at a hospital, Dai said. Woven into uniforms, the battery-like supercapacitors could power displays or transistors used for communication.

The researchers are now expanding their efforts. They plan to scale up the technology for low-cost, mass production of the fibers aimed at commercializing high-performance micro-supercapacitors.

In addition, “The team is also interested in testing these fibers for multifunctional applications, including batteries, solar cells, biofuel cells, and sensors for flexible and wearable optoelectronic systems,” Dai said. “Thus, we have opened up many possibilities and still have a lot to do.”

The Ministry of Education, Singapore and Asian Office of Aerospace Research and Development of the U.S. Air Force and the U.S, Air Force Office of Scientific Research funded the research.