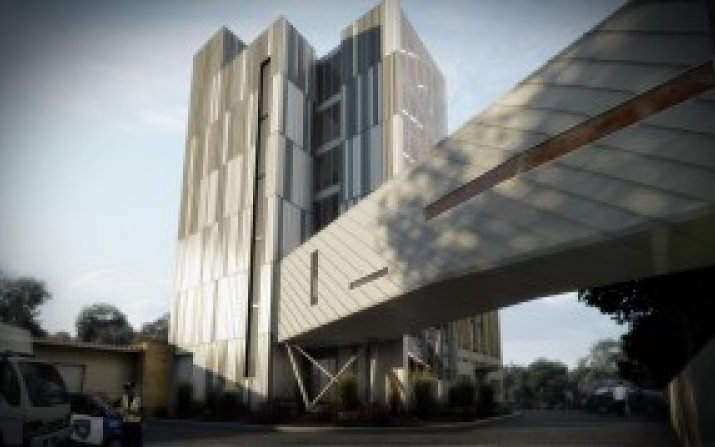 Case Western Reserve will break ground this fall on the first phase of a seven-story, 50,000 square-foot innovation hub designed to give visitors the space, technology and expert advice to imagine, prototype and, if they are so inclined, transform their creations into actual products.

The White House announced the university’s plans Wednesday as part of the administration’s National Day of Making, a celebration of America’s historic embrace of invention, whether it emerges from a tinkerer’s basement or a company’s research facility. Case Western Reserve’s initiative was among three the administration highlighted; the others were at Carnegie Mellon University and the Massachusetts Institute of Technology. In addition, Case School of Engineering Dean Jeffrey Duerk will join President Barack Obama and leaders from higher education and business later this morning for the first annual National Maker’s Faire at 1600 Pennsylvania Avenue.

Case Western Reserve’s thinkbox is a $30 million project for which the university so far has raised nearly $20 million from about 70 donors. The strong outpouring of support has allowed planners to accelerate the start of construction by breaking the project into two phases. As a result, students and other users will benefit from the much larger and well-stocked space while fundraising for the second phase continues.

The concept’s promise has been Illustrated powerfully through the pilot effort known as thinkbox 1.0, a 4,500 square-foot basement space featuring equipment ranging from 3-D printers and circuit-board routers to laser cutters and a 32-square foot ShopBot—a computer-controlled device that cuts, drills, carves and more.

Opened in 2012, thinkbox 1.0 has drawn 50,000 visits in the past 18 months and served as the incubator for several student startups, among them companies marketing a fuel-cell powered bicycle and reusable rockets. The pilot space is open to students, faculty, staff and members of the public.

Alumnus Barry Romich, co-founder of the Prentke Romich Co., a maker of devices that help people with speech disabilities to communicate, donated $2 million.

A. Malachi Mixon, chairman of the board of Invacare, and J.B. Richey, another alumnus and Mixon’s friend and colleague, donated $5 million. Richey created the first full-body CAT scan.

In addition, the State of Ohio this spring approved an award of $1 million to support the project.

The facility will be open to faculty, staff and students at the university and all other institutions in University Circle, as well as K-12 students, entrepreneurial groups and the public.

Created to support ideas, innovation and design, the new thinkbox will add meeting and workspace, manufacturing equipment and experts to help guide users. The project involves renovation of the former Lincoln Storage building on campus, and its first phase includes:

Floor 1: Community; interactive presentation and workshop areas, an inventors hall of fame, social meeting spaces and more to support a range of activities focusing on users from outside the university, including K-12, students, industry groups and community groups.
Floor 2: Collaboration; open space to support generation and development of ideas. A range of informal, re-configurable spaces for users to meet, think and develop their ideas. Will include multi-media equipment to support group collaboration and expression.
Floor 3: Prototyping; A wide range of state-of-the-art digital manufacturing equipment for users to quickly turn their ideas into some form of physical object.
Floor 4: Fabrication; traditional fabrication/manufacturing workshops.

In addition to the work on these floors, the project’s first phase also includes construction of a bridge from the university’s Veale Convocation, Recreation and Athletic Center to the building’s second floor. Construction is expected to take between 12 and 16 months.

The second phase will include a large, garage-style project floor; a floor devoted to startup assistance, including business planning, intellectual property and legal advice; and a floor for incubating start-up companies that develop both within and outside the university.

The university will announce the precise date and time of the groundbreaking later this summer.