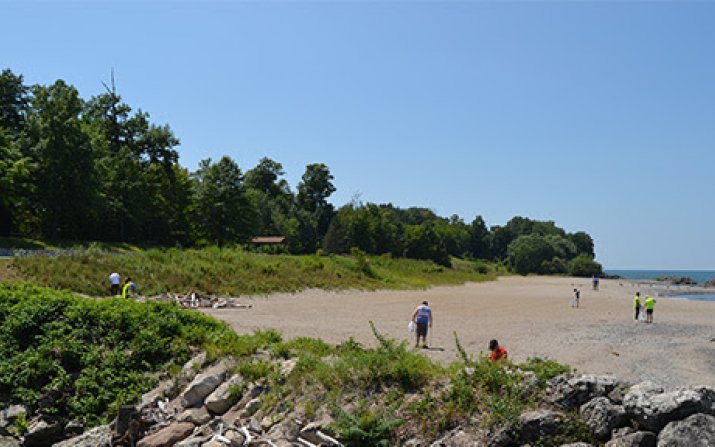 To Fehmida Kapadia, an adjunct professor in the Master of Engineering and Management (MEM) program, the best way to learn is through doing.

“You’re not going to learn anything if you don’t have real-world experience—at least that’s my opinion,” she said.

For that reason, her project management course for the MEM program requires students to undertake an experiential learning project from start to finish.

Students work in assigned groups to identify potential projects and use matrices to select which one they will pursue, taking timeline, budget, feasibility and individual interests into account.

As a result of that process, six teams in the class selected a wide range of projects, with some related to the MEM program itself and others that were entrepreneurial in nature.

One team went a different route: opting to plan a park cleanup.

After touring several locations, they selected Sims Park in Euclid, a 30-acre waterfront park with lake access, a fishing pier and walking trails.

As with most real-world projects, they encountered several challenges. For starters, with their class over the summer, they got plenty of “out of office” emails in response to their inquiries.

“That’s probably the lesson of the project management course: It never goes quite as easily as you’d like,” said Tom Seeber, a member of the park cleanup group who took the course as the final piece of his MBA program. Seeber also is assistant director of information technologies at the Case School of Engineering.

But the team ultimately secured support from Euclid, with the city donating trash bags and gloves to the cause.

Even with a date set and materials available, the team still faced its biggest challenge: getting at least 30 people to volunteer on the day of their cleanup, Aug. 4.

Their efforts paid off, as more than 40 volunteers filled 23 trash bags during the four-hour cleanup.

“Seeing the before and after of the park was amazing,” Seeber said. “Everyone there felt like we made a real difference.”

As the team finished up that day, a blue heron landed nearby, watching as the trash bags were hauled away.

“It was a fitting way to end the day,” Seeber said.

Seeber and fellow teammate Helen Liu, a rising senior and student in the MEM program, agree that the difficulties they encountered mirrored lessons they were learning in class, especially in terms of how project management often boils down to people management.

Whether it was recognizing that they wouldn’t always get a timely response from someone or working in a team composed of varying personalities, students gained skills working with people.

“This project really demonstrated the need to be flexible and adapt to changing conditions,” Seeber said. “As our professor taught us, it just could not be stressed enough how important it is to manage relationships with team members, external parties and stakeholders. While the tools are important, relationship management is the lesson that really was driven home.”

Kapadia considers those soft skills among the most important the class stresses. To help facilitate that understanding, Kapadia requires each member of the team to take the project lead for a week during the semester and execute tasks for the benefit of the whole team.

“If they manage it well, the team succeeds; if they don’t, then the team struggles,” Kapadia said. “When they struggle, that itself is a learning lesson for them.”

By encountering these challenges in a classroom setting, Kapadia explained, students are better prepared to handle them in the workplace.

“If you learn how to apply it in the real world, you will understand where things can go wrong,” she said. “This is a relatively contained environment, so it gives them room to fail without large problems associated with that failure.”