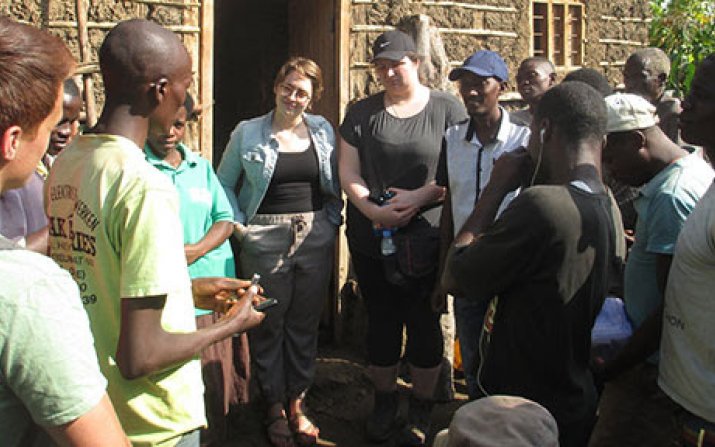 For years, Daniel Lacks has taken Case Western Reserve University engineering students to African villages, showing them a different way of life and, more recently, aiding those they visited by installing solar panels in their villages.

What he and his students didn’t realize, though, was the inherent problem with that model.

Last summer, Lacks, chair of the Department of Chemical and Biomolecular Engineering, returned to the first village where he and his students installed solar panels in 2014—only to find that the system hadn’t worked for months and the villagers didn’t know how to fix it. Though the solution ultimately was an easy one, he knew it could become a common problem.

“If you don’t know how to fix it, even though it’s very simple, it seems complicated,” said Lacks, also the C. Benson Branch Professor of Chemical Engineering.

So when he took three students to Rwanda recently, they decided to flip the script. Instead of installing the panels themselves, they taught the villagers how to install them so they would know how to make basic fixes to the systems.

Lacks and the students donated two solar-panel systems: one for a woman whose sight is worsening and another for a young family with a baby on the way. With the solar panels, the villagers will be able to have light after dark, which before was only possible with candles and kerosene—both dangerous options.

“While there was a slight language barrier, the locals where extremely interested and engaged in learning about what we were doing, which made communicating with them that much easier,” Goldman said.

But the villagers weren’t just learning—they also contributed and provided innovative solutions when challenges popped up.

Because they couldn’t take many of the necessary tools on the plane, such as box and wire cutters, Lacks and his students had to obtain some of the necessities when they arrived in Rwanda.

Once they traveled to the remote village, though, they realized the wire cutters they purchased didn’t have a built-in crimping tool like the ones they used back home, which presented a problem when putting the system together.

Instead, a villager came up with a solution to work around the problem.

“I think they could see that something that looked intimidating at first really is something that they could easily do,” Lacks said. “They’re not any less inclined to this. It’s just overcoming a barrier, which they were easily able to do.”

For Goldman, having the chance to show young girls that women are capable of becoming engineers was particularly rewarding. Of the three students who went on the trip, two were women.

The villagers weren’t the only ones to learn from the experience, though; the CWRU students took away many lessons as well.

“One of the most important things that I learned was that it doesn’t take a lot to make a difference in someone’s life,” Goldman said.

Lacks and his students hope now that the young men know how the panels work, they will be able to fix problems and, if desired, purchase the parts and install new ones on other homes.

“It has more of an impact. It’s more enjoyable and there’s more interaction with the locals,” he said. “This is the way we want to do it.”