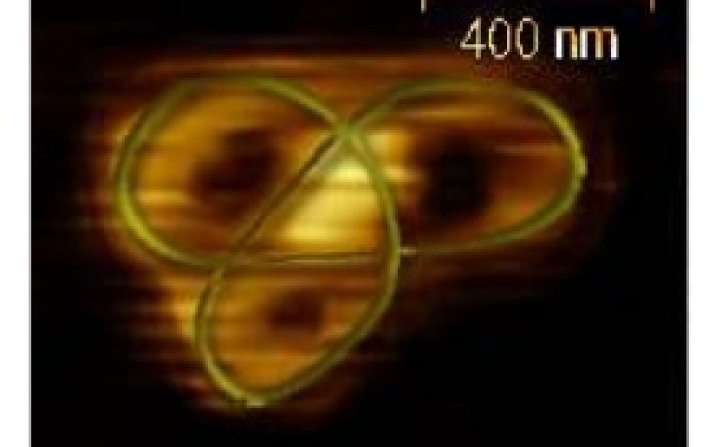 Turning the art of a trefoil knot into polymer science is no easy process, but researchers at Case Western Reserve University developed a technique that produces a long chain molecule with the desired pretzel-like shape.

“There are indications knotted polymers could be used to make more stable protein structures in drugs or imaging biomarkers—making both more effective,” said Rigoberto Advincula, Case Western Reserve professor of macromolecular science and engineering and leader of the research. “Or they may be used to make high value polymers with lower viscosity and lower melting points, which would make them less expensive to produce.”

In the year since he announced the new technique, physicists and polymer researchers worldwide have been requesting and receiving samples from Advincula, most often to test for new properties the knots may offer, compared to the simpler chains used to make polymer films and fibers.

Now, the National Science Foundation has awarded Advincula a $300,000, three-year grant to develop methods for producing knots at an industrial level.

Advincula worked with Case Western Reserve graduate students Peng-Fei Cao and Joey Mangadlao to develop the original technology. Their research, published in the journal Angewandte Communications, drew a congratulatory email from Jean-Pierre Sauvage, an emeritus professor of chemistry at Université de Strasbourg, France, who is considered the father of supramolecular knot synthesis.

Trefoil knots are common in Celtic art: three intertwining loops resembling the outlines of three overlapping leaves. A trefoil knot can be made with rope by first tying an overhand knot then connecting the two loose ends. But that strategy doesn’t work well when trying to tie a long-chain molecule.

Instead, Advincula’s group created a copper-based template, then grew a polymer knot along the template’s architecture through a process called ring-expansion.

Like the trefoil and other knots studied by mathematicians using knot theory, the molecule appears to have no beginning and no end.

When the grant starts in July, Advincula’s lab will focus on designing and synthesizing new compositions of catenated polymers (monomers connected in a chain) and block copolymers (two polymers joined at the ends) using ring opening and ring expansion polymerization techniques.

The researchers will collaborate with polymer physicists, theorists, and rheologists in the U.S. and around the world. They will use knot theory to develop various knotted macromolecules with controlled entanglements as well as block copolymer compositions with high yields and high molecular weight.

The knots are expected to produce different physical and chemical properties in plastics, coatings, rubber, composites and more.