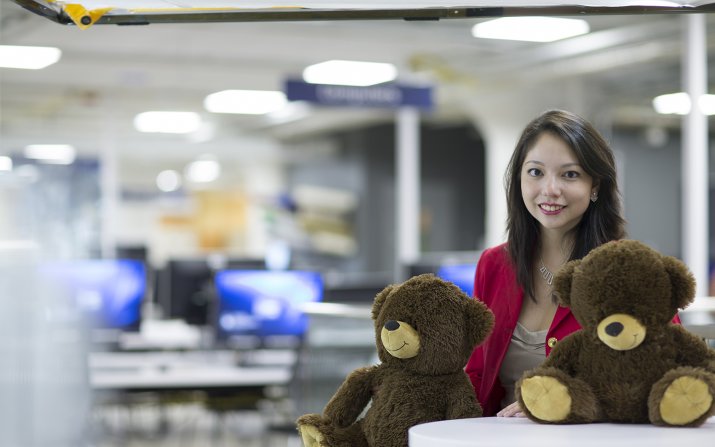 Xyla Foxlin had an unforgettable 21st birthday: She spent it in Los Angeles on the set of a commercial for the Microsoft Surface laptop.

In one, she’s one of two individuals featured using the Surface.

In the other, she stands at a desk working on the laptop in the center of an otherwise empty room; in a voiceover, she shares her experiences with the Surface. Her startup, Parihug, even gets a brief cameo, as the company’s website is one of the pages she scrolls through in the video.

Parihug allows loved ones to hug—even across the world—with Bluetooth- and Wi-Fi-enabled teddy bears that vibrate when one is hugged. Earlier this year, Parihug captured second place in South by Southwest’s “Student Startup Madness” competition.

Foxlin heard about the Microsoft commercial opportunity when a few of her friends sent her a link to the casting call, which sought students who had launched their own startups.

After interviews with the casting agency—which narrowed the field—and eventually Microsoft, Foxlin was selected for the commercials.

Once on set, Foxlin tried to distance herself as much as possible from the title of “talent,” preferring instead to work with the crew and learn more about what they do. She even had the chance to operate the camera crane and try out other pieces of equipment.

“Seeing video production on a professional level was really cool,” she said.

When production wrapped and the final piece was ready, Foxlin first saw it on YouTube. But then, one day while at Jolly Scholar, she looked up and saw her face on the screen.

The commercial airs nationally and has appeared during primetime shows such as The Big Bang Theory.